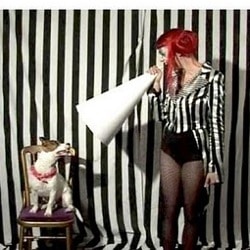 No, The Kings Speech is not going to win track of the week.

We here at musicOMH like to do things differently. There will be no riding a wave of public opinion to the beach of general acceptance. There will be no populist uprising telling us what to write about. We are not French politicians watching the crowds going by, declaring we must find out where our people are going such that we can lead them.

No. We do not follow. We will make and stand by our decisions. They will be bold. We will be bold. Trust in them. Trust in us, and you will be rewarded. In a lot of ways, we are just like the Queen.

Hmm. In many ways, this feels like an uncomfortably slippery slope we’re now on. So let’s stop.

Besides, we don’t even have track of the week – just ask poor Gabby Young in a paragraph’s time. But what we do have is another trek through the wheat of this week’s tracks. And if you don’t like it, you can kiss my indecisive ass crack. (Thanks Dr. Dre).

Gabby Young and Other Animals – Ask You A Question

Like a red-haired tempest blowing away the cobwebs, Gabby Young returns with Ask You A Question; a colourful romp lively enough to cut through the thickest of hangovers.

It’s a bit of a treat, this one – like Bellowhead in a corset – and if we were in the business of handing out gongs for track of the week, we’d be air-kissing Gabby like there’s no tomorrow. But we’re not. So we won’t.

It’s amazing what feat. can now mean. Here, Eminem and Skylar Grey (who’s name inescapably brings to mind a no-frills American airline) do all of the work and Dre wades in at the last minute to grab all the credit.

It’s a slightly bizarre spectacle: Dre looks like he’s spent most of the past seven years preparing for Musclemania 2011, rather than working on his long awaited album, leaving him a head several sizes too small for the rest of his rippled body.

Eminem spends the whole video doing the patented furrowed-brow, confused-and-angry-at-the-same-time shtick that propelled him through 8 Mile like a slightly enraged marmoset and the whole thing is super bombastic, totally over-dramatic and kind of hilarious.

Anyway, it’s worth the entrance fee alone for the bit where Dre tells all the haterz they can “kiss his indecisive ass crack”. Which in the canon of hip-hop disses has got to be one of the most unappealing.

With a monicker straight from the Kanye West School of Caps Lock Abuse, FOE is out of the box and in your face, casting aside grammatical conventions like an unused, unloved dictionary. Yeah!

Tyrant Song speaks for itself too: a crushing, sassy slice of post-rock with a creepy, flickering Donny Darko-style video that would make her cited influences – “Dahl, Lynch, Hitchcock, Zappa, PJ Harvey” – proud (though Bet Lynch is more a brass band sort of girl, surely?).

Everybody knows J Mascis – singer, songwriter and guitarist of Dinosaur Jr fame – and almost as many will have by now heard Not Enough, the rather excellent Terry Reid-esque lead single from his imminent Several Shades Of Why LP.

Few, though, are yet aware of this curious tte tte with the mysterious “Maureen”; an awkward, amusing and frankly bizarre episode that comes across like an unresponsive Sauron being interviewed by his strange but well intentioned aunt, who teases out monosyllabic responses about favourite collaborators, fingerless gloves and the colour purple.

Watch it for yourself…

..and give the track a whirl too

Ok. We’re cheating here. There’s no link below, no flashy video, no free download, no particular reason to feature the third single from the Beards Grimm here today.

Aside from the fact it’s ace. Plus it proves the sentiment of the original introduction. We cannot be bought. Unless someone would like to try.

It’s probably the least sexually charged number from Grinderman 2, but none the worse for it, as Cave mutters nonsense about Ali McGraw, Steve McQueen and Marilyn Monroe’s negligee like he’s been taken by the spirit of Spike Milligan.

Darren Hayman – The Winter Makes You Want Me More

Is that twat from Savage Garden still about? You’d think he’d have his hands full (allegedly) decking Thai waiters. Time to sharpen the knives and have at him, the big prima donna.

Wait, what? Oh. That’s Darren Hayes. Darren Hayman, it turns out, is one quarter of bluegrass supergroup Hayman, Watkins, Trout and Lee, isn’t a prancing pugilist and has on his hands here an adorable, careworn ditty with a video to match. A truly, madly, deeply fantastic number.

Yes, we already cast our beady eyes over this track in the inaugural edition of this column, but it seems that we were far too trendy for our own good: the bacon-bedecked Beethoven of pop hadn’t even cobbled together any visuals for her Madonna lift off.

She’s eventually raised her game to match our own, and this is the result: a stylish if unconvincing stab at high art in which a visual blend of Janelle Mone meets Alien Resurrection segues into the most ordinary of pop numbers. Let the tweeting commence!

As an aside, in Closer this week apparently a source told the magazine that Gaga was “out of control on drink and drugs” and was “cracking-up”. Now, we ask you, does this video give the impression of someone completely off their tits on the verge of a breakdown? It does? Oh.