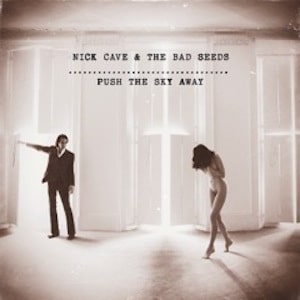 Christmas is coming. The geese are getting fat. Thank you to The Daily Mail for pointing that out for us. Geese, white is definitely not your colour. Oh, and during the festive season do you not think it might be worth going for a full sleeve in order to cover those pudgy wings?

Of course, we’d never dream of making such bitchy, shallow remarks. We’re of the biblically approved opinion that he who is without sin should cast the first stone. Unless it’s at Pitbull.

TRACK OF THE WEEK: Nick Cave & The Bad Seeds – We No Who U R
Consider us intrigued. Why? Well, there’s the title. Has Nick Cave discovered the joys of messaging? Can we expect max PROPS and TOTS LOLZ to be the major themes of the new album? And the video, which has more redaction than the pre-watershed transcript of footballer’s Christmas party. And we haven’t even mentioned the song, which is subtle, thoughtful and rather beautiful.

A stark piano lapping around Cave as he calmly ponders the fact that he knows who we are (gulp), and he knows where we live (eeek) and he knows there’s no need to forgive (we aren’t sure if that’s a good thing or a bad thing).

It’s the first material we’ve heard from their new record Push The Sky Away, due out in February. However, it’s enough to ensure our anticipation has reached the salivatory level of a hungry bear watching a distracted rambler edge closer. (TL)

San Cisco – Beach
Despite the name, this youthful four-piece aren’t from San Francisco, but instead hail from Fremantle in Western Australia. And if you assumed that they would follow the slightly trippy psychedelia Antipodean template drawn by the likes of Tame Impala, think again. San Cisco are jangly, mournful indie and sound absolutely beautiful.

Beach may start off with 2012’s biggest musical cliche – that’s an 80s style portentous synth riff – but soon develops into a heart-tuggingly dreamy love song with lyrics like “I made a mix-tape of all the songs that you hate” and some gorgeous vocal interplay between Jordi Davieson and Scarlett Stevens. With the weather becoming ever more sub-zero, this could be the best way of letting some warmth in. (JM)

Darwin Deez – Free (The Editorial Me)
Darwin Deez split opinion when he/they first appeared in 2010 (confusingly, the band share the same name as the lead singer). To some, he was an insufferable hipster, with silly hair and a tendency to the twee. To others, he was a breath of fresh air and busted some rather brilliant dance moves during his live show. Actually, everyone loved his dancing. Surely?

Now Darwin is back and while the hair may remain, he seems to have toughened up his sound. Free (The Editorial Me) is a buzzy, fuzzy little gem with a chorus that pays close homage to Tom Petty‘s Free Falling. There’s also all manner of weird little electronic loops and, above it all, Deez’s mournful, sorrow-filled voice which hints at a darker direction for the upcoming second album.

And as long as the synchronised dancing remains during the live shows, we’re welcoming him back with open arms. (JM)

Jamie Lidell – What A Shame
Jamie Lidell has always had a slightly schizophrenic side to his musical persona. The introspective soul-man one moment and the wilfully eccentric maverick the next. What has remained a constant is that incredible voice – one of the few British singers who can genuinely be described as soulful.

What A Shame, the first single from his upcoming self-titled album, embraces the weird and Lidell sounds all the better for it. It’s a noisy, glitchy marvel of a thing, with the influence of his sometime collaborator Beck written all over it. The contrast between Lidell’s honey-smooth vocals and the abrasive, tense nature of the rhythms makes for a wholly euphoric listen.

Roots Manuva – Natural
We’ve not heard from Rodney Smith for over a year, but this taster from next month’s Banana Skank EP sees him still effortlessly on form.

A duet with Kope from the Roots-inspired London collective Banana Klan, Natural has a ridiculously dirty bass sound, a slow-burning, insistent chorus, and a haunting piano loop. What really makes Natural work though is the chemistry between Kope and Roots as they effortlessly trade verses. It’s Smith who comes up with the best line, a nicely self-deprecating one about “rap for hipsters, and fashion casualties”.

In his understated way, Roots easily demonstrates he remains the leading light of British hip-hop.

Fryars – In My Arms
You may remember Fryars from a few years back when teenager Ben Garrett appeared with a maverick disregard for the placing of capital letters (he used to be known as frYars) and an album, Dark Young Hearts, which failed to build on the early promise he’d shown.

Then he disappeared for 5 years, spending his time collaborating with both the likely (the similarly ‘missing in action’ Ben Esser) and the unlikely (Mika). Suddenly, last month, he reappeared with the rather excellent Love So Cold, and In My Arms sees him treading similarly minimal territory.

Garrett weaves a spectral piano line around some glitchy electronic beats, and the result is warm, uplifting and still – somehow – a little bit sad. Let’s hope the second coming of Fryars is a bit more successful. (JM)

Jonny Pierce – I Didn’t Realise
Jonny Pierce is best known as the singer from US indie band The Drums, but fans of the group who wanna go surfing needn’t worry. They’ve not split up, Pierce is just using this time before they record their third album for a solo project.

And, in a similar fashion to Kele Okereke when Bloc Party were on their ‘break’, this is likely to leave fans of his band a bit non-plussed. I Didn’t Realise is miles away from The Drums’ usual fare – it’s spacey, strange and a bit abrasive, with only Pierce’s vocals sounding how you’d expect. There’s no guitars, no drums (ho ho), and instead there’s a electronic drone running all through the song.

It’s all surprisingly good, especially as The Drums never showed any real signs of being particularly experimental. Don’t expect to dance along with it, but this could be one of the year’s most surprising solo projects.