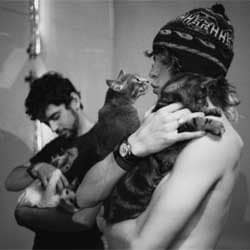 And lo, as the British weather sprang forth with unexpected pleasantries – our faces melting in sodding October – so too did the music industry’s movers and shakers: nothing in our inbox rubbed us up the wrong way this week (so to speak), our careworn mugs shifting uncomfortably into expressions approximating pleasure, satisfaction, and other such foreign sensations.

We shan’t, however, let ourselves get carried away. We’ve a sneaking suspicion (is there any other kind?) that we’ve reached the pop schedule’s high watermark, and that we’ll shortly be confronted with a Justin Bieber/N-Dubz collaboration, a Fearne Cotton spoken word LP and news that Radiohead are to re-release OK Computer as a super-polished K-Pop concept album.

But hey, surely we we can just enjoy the cornucopia presented before us today, and, as we do so, set our crippling fears over an uncertain, terrifying and ultimately pointless future aside. Temporarily. Allez!

MGMT – All We Ever Wanted Was Everything

The Late Night Tales concept is a strong one. Take one contemporary artist, ply with booze and request a selection of tunes for a theoretical post-pub session at their gaff. When we’re approached for our choices, we’ll cross the proverbial streams with the likes of Bill Shatner, Dyewitness and Shampoo; “incoherent” will be the watchword.

More coherent are MGMT’s selections – Suicide, Cheval Sombre, Spacemen 3 et al – wrapped up with a Paul Morley spoken word piece and spearheaded by this rather beautiful cover of Bauhaus‘s All We Ever Wanted Was Everything. All we need now is a space on the floor and a bacon sarnie in the morning.

Sound the album klaxon – Zola Jesus’ Conatus is upon us at last! Something of a tizzy is afoot: we were struck by Vessels (not literally) all the way back in July, and now its long playing progenitor has spewed another preview in the form of Seekir.

It’s Austra; it’s Gazelle Twin; it’s another entry in the canon of portentious, minor chord, female-led electro. Finger-on-the-pulse stuff, no doubt, and a pin in the road map of 2011’s best and brightest.

Dananananaykroyd to split? Hahahahaharoldramis! No, we’re not really pleased: their Scottish dynamism has entertained over the past five years or so – like a longer lived, less annoying Test Icicles – and their disbanding will be a genuine loss for the live scene.

The band sign off with Think & Feel, a serrated, discombobulated nutter of a number of which we’re extremely fond. With a likely-chaotic farewall tour on the horizon, it seems that they will not go quietly into that good night.

I Swam With Sharks – Just Be Good

Now you’re talking: an incisive, infectious and hook-laden stomper accompanied by a slick widescreen promo that segues from World War I traumas to the most surreal of social club gigs. It’s not often that we refer to an act as “upstarts” without a smug grin of irony plastered across our faces, but I Swam With Sharks are the exception that prove the rule. Most definitely a name to keep tabs on.

Norwegian electro-rock revivalists Datarock are a marketer’s dream: snappy soundbite music tailor-made for videogame soundtracks, Apple advertisements and reality show incidentals. Not that there’s necessarily anything wrong with that.

As with most Datarock output over the last decade and more, California fulfils the prerequisites. A bombastic, hedonistic ear-bruiser, it features the obligatory large sunglasses, raving punters and flashy lights by the bucketload. If that’s what you’re into, you know what to do…

Surf pop lives on through the likes of Dum Dum Girls, She & Him and Best Coast, though their revisions sometimes lack that certain something. We prefer our surf pop twisted, like Pixies‘ Ana; the freak-out passages in which one pictures sun-kissed bathers in a state of mortal fear.

Granted, The Lucid Dream’s Heartbreak Girl isn’t exactly nightmarish, but it’s well on its way with a hearty, heady dose of psychedelia and frantic percussion. It’s essentially surf pop as interpreted by The Jesus And Mary Chain, and if that doesn’t float your boat then we despair. We really do.

If there’s a better way to breathe new life into a three-year-old tracklist staple than to relaunch it with an ET-minus-the-happy-ending music video touching enough to reduce the most embittered of critics to heaving sobs (not us; different critics), we’re yet to hear of it.

Cloud Control, you beautiful buggers, you’ve done it again. The Bliss Release LP has become the gift that keeps giving.

Desert noises in real life: the hollow timbres of corrosive winds flaying exposed skin; the brittle crackling of sun-baked vegetative remnants underfoot; the despairing wheeze and mumbled curses of the heat-frazzled vagrant; the merciless cawing of the growing host of ravenous vultures (…do vultures caw?).

Desert Noises in the pop business: Band Of Horses-esque shimmering melancholia in the alt-country mold, put together, prepped and pushed out there by a young Salt Lake City quartet whose sound belies their tender years. Not half-bad.