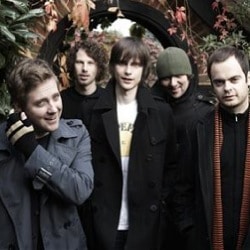 Look. We told you ages ago. This isn’t a singles column. It’s a tracks column.

And as such we reserve the right to twist the definition of what we can and can’t do within its bounds to such an extent that it begins to throb and turn purple.

So this week we’re not going to tell you anything vaguely useful. Nope. We’ve lacerated the Lopez, torn down the Take That and ground away the Gaga. Why? Why you ask? Because we didn’t get to go to Primavera. Even if somebody else from musicOMH did.

As our Spanish teacher once told us: “No le se. Pero tengo el burro.”

So instead of watching

we’ve been stuck listening to this again and again and again. We don’t like it; in fact it makes us want to introduce our face to an industrial grinder. But, as everyone knows, pain loves company.

But don’t worry, what we have here are some offerings by a bunch of other artists who may well have seen Pulp last weekend. Bastards. Oh, and the Kaiser Chiefs. Who are from Leeds, and, uh, who like San Miguel and are therefore inexplicably linked to all things Iberian. Ol.

There’s something a bit uncomfortable about this video. Something that suggests that they kept promising Ricky a bit where he could jump up and down and go WOOOOAH! as normal, but then it doesn’t ever quite materialise.

Look at 0:11. He’s waiting. He’s ready. His mouth forms around the W… but then, nothing. You can see how annoyed he is. Look at 0:17, as he just shakes his head in utter disgust.

Honestly Ricky, its not that bad. Of course it’s not good, or anything like that. Grinding away seemingly with the ultimate goal of morphing into Apply Some Pressure played by Maxmo Park at half speed, poor dear. But anyway. Cheer up. Have some Enrique. Not that it worked for us.

We were never very good at Spanish; it was like a foreign language to us. Our tongues tripped over those rounded Rs like clumsy tourists at Pamplona’s Running Of The Bulls.

Fortunately for us – though perhaps not for Señ Woods – such tribulations can be left firmly in the past: Bilbao’s Capsula are more Baltimore than Basque; more pretzel than paella.

Which isn’t to say, of course, that they’re no good. In Hit ‘n’ Miss they pull off a passable impression of a cooler Jet (so The Von Bondies, then), serving as a shot in the arm for all those balmy Spanish afternoons yet to be slept through.

“Ace Reporter? You mean Chris Snyder?” we hear you ask. “You mean to tell us that this pale ginger bloke is Spanish?”

Well, no, not exactly, but think about it: the video for Untouched And Arrived was shot on a rooftop in Brooklyn, which is only a hop, skip and a siesta away from Spanish Harlem. Obviously. Couldn’t be more Iberian if it tried.

But listen, we couldn’t exclude this little gem. For a man who created an original song for every day of 2010 you’d think he’d be a little short on ideas, but think again: this is a track that pops out at you as its acoustic mode builds momentum. Lovely. The audience participation hasn’t gone unnoticed either.

Nothing says “Primavera” like an Oriental, Yuletide cover of a Fleetwood Mac classic. It’s enough to usher the scent of sangria into the dullest of days.

Chinese Christmas Cards, however, don’t seem to have gotten the memo: Monday Morning is pristinely-produced preppy power pop (a less whiny Owl City, if you’re into that sort of thing) that may just serve – like a waterpark next to a festival campsite – as welcome relief from a line-up otherwise as serious as you’d care to imagine.

Then again, that chorus is more than a tad grating; hardly the MGMT-style psychedelia they appear to be driving at. Where’s the dance tent again…?

Tell us what you make of our selections. Especially if they’re not quite Catalan enough for your tastes. [email protected]