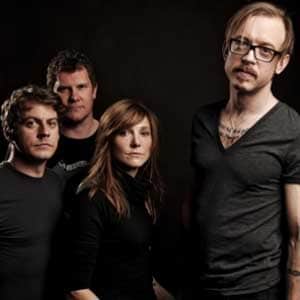 It’s not that we wouldn’t like to feature all the tracks submitted to us in any given week. Trust us, we cast our beady little eyes over every little morsel fired our way. It’s more a matter of logistics.

For us to write up every new song would require typing speeds beyond our gnarled fingers, a sharp and wholly unlikely upturn in mental dexterity and the omission of certain other weekly tasks – bathing, shaving, leaving the house. That sort of thing.

Still, it is with heavy hearts that we cull new music’s prized sow and discard all but its most noteworthy cuts (and sometimes, just sometimes, its LOL-worthy curly tail). Perhaps we’ll one day expand our capacity for snark-faced, spell-checked musings (more hands on deck? A million percent pay hike?) – but in the meantime, here’s the latest run-off from the abattoir floor of pop.

But Joyful Reunion does it for us, serving, as it does, as a canny waypoint ahead of the band’s third album Crown And Treaty – a useful shot across the bows, in Emperor Charley’s vernacular – by showcasing a finale swelling enough to prick the attention of the most distracted ears.

iamamiwhoami Sever
We’ve never claimed to be perfect. It is a fact that, sometimes, tracks slide under our gaze like slugs under our front door (don’t ask), but we’re man enough to accept our gaffes, hit rewind and make amends – especially for singing-songwriting curio Jonna Lee and her iamamiwhoami multimedia project.

So here, in its full glory, is Sever: the first instalment of upcoming audiovisual LP kin, it is measured, Knife-style minimalism in which Jonna frolicks gaily with Cousin It. Magnificent.

Madonna – Girl Gone Wild
Madonna is now claiming to be “like a girl gone wild”, but we can think of better, catchier similes for the grand old dame of pop: like a dog with a bone, for instance. Or (in-joke for Being Human viewers here), like a succubus devouring young producers who don’t know any better.

But we doubt any of our suggestions would have made it past the filter marked “lowest common denominator” and into Madge’s new number, so let’s instead follow Madge’s example: dress like teenagers and saunter off down to the disco like the ageing process is merely something that happens to the little people .

Spiritualized Hey Jane
Amazing. Astonishing. Scarcely believable. In fact, we had to go back and listen to it twice before we actually were sure that we hadn’t made it up.

Which given that Hey Jane is as near-as-dammit 9 minutes long indicates the level of our professionalism. And our incredulity. But, it is true. We’re almost positive that on the new Spiritualized single Jason Pierce does not mention catching on fire, being on fire, God, Jesus, or how falling in love and doing drugs are really similar.

Nope, Hey Jane is breezy and jangly and not loaded with any sort of obvious weighty allegory at all. We KNOW. We KNOW. No. It doesn’t seem right. We’re going back to have another listen, just to make sure.

Rufus Wainwright Out Of The Game
Adding Mark Ronson’s easy-to-apply brassy shine to Rufus Wainwright’s poperatic sensibility? This is going to be messy, isn’t it?

Um. No. Actually, no. It’s quite restrained. Its got an easy going swing, a finger-snapping, bow-tie undone, vaguely rat-packy kind of strut which is very easy and very pleasurable to listen to. We should have guessed; Ronson’s faithful update to Duran Duran last year demonstrated to the world that he’s more than a big horn. And it’s not like Wainwright needs music lessons now, is it?

School Of Seven Bells Lafaye
Tthis is sort of great. Pounding, thrusting and fist pumping, but with eerie, frightening undertones.

Which, strangely, is also how people tend to describe our dancing. But don’t let that fool you, Lafaye, from School Of Seven Bells’ new (and much better than the last) album Ghostory, is a cracker.

But the other thing that’s freaking us out a bit is just how much it reminds us of Saint Etienne‘s He’s On The Phone. No? Just us looking forward to the new Saint Etienne album, then…

Clean Bandit – UK Shanty
A music video shoot off the coast of Britain sounds like a good idea, but it rarely is: the overwhelming impression of Clean Bandit in UK Shanty – despite the presence of supermodel Lily Cole as a mermaid (obviously) – is that each and every shivering participant is within a degree or two of going into shock.

But we’re led to believe that the London collective – a largely instrumental outfit blending classical, hip-hop and electro – appear to have survived their ordeal, and it’s just as well: UK Shanty is legitimately different, fiercely enjoyable, and a compelling argument in Clean Bandit’s favour.

AnnaGrace – Ready To Fall In Love
As wee nippers we were convinced that No Woman No Cry was a Fugees original. Ditto for its B-side, A Change Is Gonna Come. Neither Bob Marley nor Sam Cooke were on the radar of our pseudo-urban-but-mostly-suburban upbringings.

So imagine our surprise (hato find that Ian Van Dahl isn’t some swarthy Dutch DJ a la Armand Van Helden but rather a dance group. From Belgium. Who are now known as AnnaGrace. Wonders never cease.

Actually, that’s not true: the wonders have clearly ceased for these lot. Ready To Fall In Love is no Castles In The Sky. In fairness, though, what is?

The Enemy Gimme The Sign
Sometimes a track comes along that makes you glad to be alive. Glad to be here. Glad to have the gift of music, of song. Glad to have been given this extraordinary opportunity to bask in the reflected brilliance of true artists.

Not this one though.