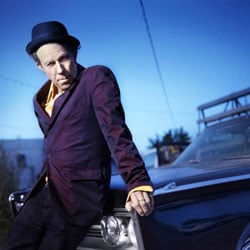 We’re of the mind that the cool, crazy and committed world of popular music could well do with a Premier League-style transfer window of its own. Just imagine the shouty, rumour-ridden, last-ditch excitement: The Feeling would do well to rope in dynamic duo Death From Above 1979 to bolster flimsy, shot-shy frontman Dan Thingy-Thingy, while the Galacticos of SuperHeavy might offload overpaid, under-performing veteran Mick Jagger to perennial strugglers Jamiroquai in an effort to rein in a runaway wage bill. Free agent Victoria Beckham would engineer a controversial switch to LA rockers 30 Seconds To Mars amid widespread concerns of deficiencies in the American game.

This tracks column would be an indispensable who’s-who (we imagine) should such a musical merry-go-round market ever come to pass, its shrewd assessments enlightening pop pickers as to which acts are unsung steals (The Silver Seas) and which are good for glue (Tabby from X-Factor… remember him?).

That said, professional football can keep its more unsavoury aspects. Perish the thought of our rock stars partaking in five-in-a-bed hotel romps, acquiring legally-questionable super injunctions or tweeting cod philosophy to anybody sufficiently starstruck to pay heed. Such shameful behaviour!

Tom Waits Bad As Me

We can’t quite shake the image of Tom Waits performing this vocal between gnawing on a lovely, juicy bone and pawing at the bucket that’s been placed over his head to stop him licking his wounds.

Bad As Me (single number one from album number 24) is pretty much as you might expect: honky-tonking piano, bourbon-blues guitar, drums that may have been recorded in a intermodal container in the middle of the Atlantic, and *that* voice. It’s great, if just a wee bit predictable.

Still. You wouldn’t mess with the ol’ growler would you? You wouldn’t walk up to him, rub his little head and tell him heshagoodboy, oh, yes he is, hessuchagoodboy.

If you like nothing more than euphoric electropop that balances delicately between laughter and tears, Rod Thomas has a song that’ll be right up your street, if not quite down at your club.

Disco Moment is introspective, intelligent and downright catchy stuff about the end of a relationship. It should leave Robyn fans with appetites whetted for that long-awaited Bright Light Bright Light debut album, whenever it finally drops.

Eerie, spooky, atmospheric and a well-judged taster for the sometime Camille producer’s new album The House Of Bones, due out at the end of October, The Struggle sounds like nothing else released this year. And until it’s released as part of a remix package, it’s free to download.

Not only that, but the vaguely vaudevillian forest set-up for the video suggests how peaceful and serene Florence‘s Rabbit Heart could have been if she hadn’t insisted on squawking all over the top of it.

Nothing floats our boat like a tour diary music promo. The unkempt locks; the impromptu mano-a-mano horseplay; the lawbreaking abandon and implied intoxication. It’s the perfect pyjama party, and everybody’s invited.

Iceage’s tour diary music promo ticks all the proverbial boxes, its breathless freewheeling mirroring the track’s pacey, punk-populated passions. They’re nothing but an absent apostrophe away from unfettered glories.

…God, just imagine we were really like that. Weird! We’re actually rather fond of Vision In Rags; we’ll probably give it another spin once we’ve finished darning these socks for the local orphanage.

The Silver Seas – Help Is On The Way

But hey, name change or no, Help Is On The Way ain’t half bad: gentile yet rousing, mellow yet rocking. They’re this year’s Chief… which is to say that they’re the most rewarding band you’ll have forgotten come 2012.

Are we sitting comfortably? Then let’s harsh that buzz with surrealism of Lynchian order. Acid Glasses will have you tapping your toes in your nightmares.

Of all of the surprise sentences to clog up the Internet this week, none were quite so scarcely believable as “Jack White Collaborates With Insane Clown Posse to Cover Mozart”.

What can you add to that? What else can you possibly say? Aside from the obvious post-script of, it is as dreadful as you can imagine. But you should listen to it, if for no other reason than to convince yourself that it did actually happen.

For whatever reason, whatever set of cosmic interplanetary alignments, predestined collection of circumstances, conjecture and hearsay that come to define any one person’s existence at any one time, every single thing that the Dum Dum Girls seem to do at the moment seems to resonate deeply within our very being.

Bedroom Eyes is no different. It’s a lovely, love-lorn, piece of surf-pop perfection that will either leave you blubbing into the arms of that special someone or blubbing into a massive 14-pint pitcher of gin.