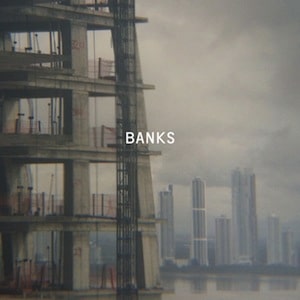 Now that we’re all in total agreement that the Olympics is a good thing (except Morrissey, naturally), we assume that everyone will be keen on a series of metaphors that will almost imperceptibly link this column with our athletic heroes.

Hundreds of artists are eligible for inclusion in the Tracks round-up each and every week, but only a few meet our exacting standards. They Fosbury flop over the bendy bar of our unrealistic expectations, cycle swiftly past our mistaken sense of superiority and dash to the finish line of approval faster than we can conjure the adjectives to snobbishly dismiss them.

Paul Banks The Base
This, this is grrreat. Paul Banks, Interpol front man and occasional inhabiter of the Julian Plenti pseudonym, has a new solo album out in October. This time it’s under his own name and entitled, simply, Banks. And The Base is the first song from it.

There’s a hint of Dirty Projectors pop-oddness, as elements come and go, instruments rise and fall, and the song twists and curves around. In the middle is Banks’ baritone, instantly recognisable, which casts The Base in familiarly Interpolian shadows, but on any kind of closer inspection The Base is lighter. And quirkier.

It’s not a song you talk through, is White Chalk. Through sheer haunting solemnity to it that makes you think that if you did, some greater being would come down from up on high, and smite thee with abundant force and violent rage.

With a signpost as spellbinding as this, debut album Ark will surely be quite the record to behold.

Biffy Clyro Stingin’ Belle
Well, we thought they were cool. But like a porcupine? No Biffy. No. Not like a porcupine. In fact, we didn’t even consider the porcupine to be particularly cool animal. Only the protagonists of the best animal joke ever: how do porcupines make love? From behind, with some vicious, hard thrusts. Wait. That doesn’t sound right.

But anyway, the new single from Biffy. It may just be us, but Stingin’ Belle does suggest that the now huge Biffy are going to approach their hugeness by going ever so slightly over the top. Or, in musical parlance, ‘doing a Muse‘.

Only there isn’t the po-faced seriousness to their grandeur which makes someone call songs Exo-Genesis: Symphonica (ma coeur est mon frere) I-IV-X. More just the slightly bonkers exuberance of a monkey being given the keys to the banana plantation and told to just let himself go. It’s the sort of thing that can only end with Simon Neill playing a keytar and riding a snow leopard. We can’t wait.

Kiasmos Thrown
You’d imagine Icelandic techno to be quite icy. Clean. Minimal. Unfussy. And you’d be right. Kiasmos is made of Icelandic modern classical composer lafur Arnalds and Bloodgroup mastermind Janus Rasmussen from the Faroe Islands and this is the first taste of their new EP.

Moody and precise, and drenched in tasteful tones, it’s inordinately better than that Croydon techno that we hear blasting out of Vauxhall Corsas as they perform embarrassingly lame doughnuts in a car park.

John Cale – I Wanna Talk 2 U
The technological travails of older generations are adorable, aren’t they? Typing URLs into the search bar rather than the address bar; shoe-horning poorly executed text-speak into greetings cards for the grandkids. Oh, the lovely, useless buggers!

And while we weren’t exactly thrilled to see the shortformed title of new John Cale number I Wanna Talk 2 U, the ex-Velvet Undergrounder – 70 years young! – has hit the mark on this occasion with a little help from a certain Danger Mouse. Not half-bad.

Euros Childs – That’s Better
It would appear that good old Euros has the Midas touch. Here he is, up at the crack of noon, looking somewhat bedraggled in a peach tee he found on the floor, and yet all he has to do is churn out some harmonies in that lovely Welsh lilt of his and BANG, you’re under.

That’s Better is by no means ambitious – sitting comfortably in Graham Coxon‘s crevice of Buddy Holly revivalism, with a touch of The Coral poured in for good measure – but if there’s a more enjoyable theme tune for the crazy, hazy, rain-threatened days of August 2012, we’ve yet to hear it.

Darren Hayman – We Are Not Evil
Musicians find inspiration in the most unlikely places. Pixies‘ Alec Eiffel riffs on suspicions that the Eiffel Tower is actually a spacecraft; Katy Perry‘s next song, just like her last song, is all about herself; Joe Dolce‘s Shaddap You Face is a tribute to Piers Morgan.

Darren Hayman is not so obvious. In fact, his forthcoming album The Violence is a 20-song double LP chronicling the 17th Century Essex Witch Trials during the English Civil Wars. No, really. Get your ears around this and learn something, sunshine.