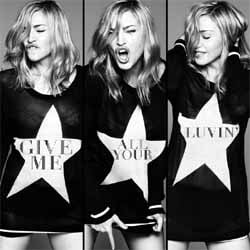 The tracks column doesn’t just write itself, you know. It can be a tremendous slog. A Sisyphean task of sifting, sorting, selecting, then typing, deleting and retyping. Our lives are, more often than not, a literal living hell.

But there are weeks – rarer than we’d like, but extant nevertheless – when a plan comes together: big names drop into the hat, readily juxtaposed against thrilling new acts and a handful of unforgettable promos. If the A-Team’s Hannibal were a tracks column contributor, he’d be pleased as punch.

So has this week been a tortuous toil or an effortless glide? We’ll let you be the judge. As ever.

Madonna – Give Me All Your Luvin’

By the time you read this, talon-fingered, vein-popping, Elizabeth Báthory of pop Madonna will have completed her Super Bowl halftime spectacular, unifying literally millions of viewers in clambering for the mute button. Few acts are capable of bringing people together in such harmony.

By the time you’ve seen the video for Give Me All Your Luvin’ (cute spelling), you’ll be left in no doubt that the world’s second best Madge (after Madge Bishop, obvz) has acquired willing victims in the form of “Middle Finger” M.I.A. and Nicki “Flavour of the Month” Minaj, but also that such a coup matters little: she’s an old mare in a young hinny’s game. File under “instantly forgettable”.

Millennia ago (OK; four years ago) we wrote about The Gadsdens and their stop-in-your-tracks-and-listen track, Sailor Song. Back then the band were just starting out.

Now called Autoheart and sporting an expanded line-up, new songs and arrangements that command even the rowdiest of venues, they’re finally set to release their debut album. Headlining London’s Barfly last week, singer Jody Gadsden’s voice was the focal point in their set-up.

In new single Control – free to download at their Facebook page, should you fancy to – it’s shown off in a song that wouldn’t be out of place on a radio. There’s a sunkissed video, too.

It’s always our goal to keep the tracks column relevant and newsworthy. Therefore, a track called Cold was just screaming out for coverage, given our current atmospheric predicament in Blighty and our tendency to resort to banal small talk about the weather when devoid of anything clever to say.

It’s worth noting that due to the snow we almost cancelled a third of this week’s reviews in order to minimise disruption. But then we realised that was stupid and didn’t make any sense.

But even setting aside thoughts of favouritism through relevancy, this, the new single from Blood Red Shoes, is utterly magnificent. Crunching, poised and propellent, it bodes ever so well for their new album.

Die Antwoord – I Fink U Freeky

Remember how Aphex Twin videos gave you nightmares? We do. That poor old woman…

Jamie N Commons – Devil In Me

With a rumbling toll of the Sound Of 2012 bells we throw ourselves prostrate, prime our ears for the cacophony foretold and banish our ignorant doubt to oblivion: “Is it Jamie N Common like Mary J Blige or Jamie N Common as in PJ N Duncan?

But this is great stuff: tormented, gravely, soulful. Little wonder Rick Rubin is seemingly reaching out to get his hands on young Jamie.

We’re crying foul! With our debut single on the very cusp of being written, Laura Gibson has stolen our idea for its music video: “Imagine Hotel California meets Derek Acorah,” we were going to say to the label bigwigs. “And a flowing red coat with a fur collar. That we get to keep,” we would have added had the singing-songwriting siren not gazumped us.

Nevertheless, we like the cut of Gibson’s jib, and we’ll be much gratified if her other outpourings are half as melodious as this. The thieving sod.

It’s a voice that could have sunk a thousand ships, and it’s fantastic to hear it again.

The Gravedigger’s Song pares it with a grinding semi-industrial beat and a series of ever-so-slightly synthesised guitar slashes. It’s a bit Nine Inch Nails, a bit Queens Of The Stone Age and it manages to simultaneously sound modern and neolithically old.

Being Gary Barlow’s personal trainer. Being Bono’s accountant. Being the person Sting carts around chastising, criticising and belittling in a desperate (if not unsuccessful) attempt to fuel the unfounded sense of self-importance he needs to feel in order to get through the day.

These are full time jobs. But being in the Vivian Girls? Apparently not a full time job, given that La Sera is actually Katy Goodman, Vivian Girls bassist and vocalist, and this is the first single from her second album under that moniker.

And it’s absolutely lovely. A breezy, lovelorn masterpiece. One foot delicately placed in 1950s girl-band harmonies and one in skuzzy, three-chords and an attitude, garage punk.

The Twang We’re A Crowd

One. Is that hat a good idea? Really?

Two. Are the lead singer of The Twang and Matt Cardle actually the same person? Don’t they both spend similar amounts of time banging on about authenticity? And you never see them in the same room, do you?