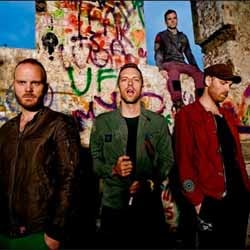 We cannot say with certitude that this isn’t our weekly tracks column. It doesn’t matter a jot that word of it spreads from our very own Twitter account like mutant E. coli, or that the URL is sort of a dead give away.

What we can say with certitude is that the following material is more than likely to be half-amusing, half-informative and wholly offensive. Avert thine eyes as we dismantle the paltry offering of your idols; guaranteed to be an unmitigated… Well, it’s actually rather good, isn’t it?

Fear not, we shall endeavour to keep such flip-flopping to a bare minimum this week.

Coldplay Every Teardrop Is A Waterfall

From it was all yellow, to it was all Global Hypercolour, and we can see exactly how little antiperspirant you’re wearing, you sweaty little oik.

That’s right, Coldplay have gone rave. Not nu-rave though. More old-rave. Early to late-mid period rave. Maybe. You couldn’t make it up. Well you could, but there would sort of be no point.

Every Teardrop Is A Waterfall, despite a title at least three syllables too long, and despite being introduced as Coldplay go-raving (sorry), is euphorically ace.

While we can’t agree with Chris Martin’s punctuation choices (“I’d rather be a comma, than a full-stop” there’s a third way Chris, the semi-colon), we can agree that this is actually the best thing they’ve done for ages. Or a bit funny. For sure we want to know how to make guitars sound like bagpipes.

We’re massive fans of Robyn around these parts. Massive. There’s nothing we’d enjoy more than a night on the tiles with the blonde dervish from that there Sweden. One second we’d be waltzing carefree around the nightclub sofas. The next she’d be drinking from the toilet and whacking us with her shoe for no apparent reason. Good times.

But if she tossed us her phone and said “Call your girlfriend,” there’d be some explaining to do: on her part, why she’d taken the japery far too far; on ours, the fact that we’re footloose and fancy-free bachelors, and have been since 1997. Still, cracking track, so it is.

Classic Robyn, in fact, which is what the rozzers probably say when they lift her off the floor for the fifth consecutive Friday night.

Nicola Roberts Dance To The Beat Of My Drum

You’ve got to admire the timing.

The only possible way that things can get any worse for Cheryl Cole is if we find Ashley sat on the sofa with Martin Bashir, sporting mascara that looks like it’s been applied with a trowel, tearfully explaining why nothing was his fault, and graciously re-ascending to his rightful place as the people’s princess. Sorry; left-back.

Fired. Unwanted. And now totally trumped by her former colleague. To be honest, we did warn you about Will.I.Am.

So yes, the Diplo-assisted Dance To The Beat Of My Drum is the most magnificently bonkers post-Girls Aloud output yet. Except for St. Trinians 2: The Legend Of Fritton’s Gold. Ok, maybe even including that.

It’s like M.I.A eating raspberry lace in a sweet shop with Kate Bush. Or Sleigh Bells having high tea in the Ritz after a Pygmalion style makeover. Brilliant.

Listen, mush, this is the stuff that’s generating genuine buzz across the blogosphere, alright?

New kid on the block (not literally) Alex Clare – bloke from the pub in a silly hat, big beard – has teamed up with producing powerhouses Diplo (yes, him again) and Switch for an absolute barnstormer of a track.

There’s a real lack of vitriol around this week. Maybe there’s been some sort memo telling the entire music industry to stop being so shit. Maybe it’s the Paroextine. We don’t know.

But the new single from The Horrors continues the trend: it’s a wistful, floaty, new-wavey delight which we like even in spite of the fact it sounds more than a little like Head Over Heels by Tears For Fears.

Mirrors – Look At Me

“Look at me / Look how love has changed the man I used to be.” So true, Mirrors. So true. Our love handles were half this size this time last year. No, really. Well, OK; marginally smaller.

Still, what better way to soothe our souls than to slip some sultry synth stylings on the speakers and slither suggestively, stopping simply to sup sweet sarsaparilla to sustain the serpentine swagger? Simply sensational stuff.

Danny & Freja – Only You / Is Tropical The Greeks

Two small tokens of our appreciation for your having made it this far: a Eurovision-esque guilty pleasure, with a glimpse of blink-and-you’ve-missed-them boobies, and a Klaxons-esque slab of electro-goodness with kids sporting guns pretending to be drug dealers and jihadists. Is there anything more wholesome?