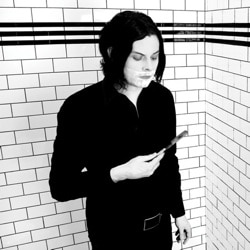 If we were to shoehorn the music industry into a clumsy Easter Bunny metaphor, we’d expound on how we’re sent Easter eggs every day of the year. Some are handcrafted beauties, created with with loving attention and utterly satisfying to consume; others are mass produced slabs of low grade chocolate, poor quality control resulting in the odd razor blade or severed finger.

As the week progresses, your confection-induced belly ache has the chance to subside. For us, the feast must go on: sticky-fingered, chocolatey-mouthed, we gorge on the industry’s cocoa ouevres. Join us as we peel the foil from this week’s efforts and peer at the goodness – or otherwise – inside.

Jack White – Sixteen Saltines
Old Jack’s really in for it this time, as Sixteen Saltines finds him in an urban wasteland devoid of order; where young children get high, tattoo their own faces and pretty much behave like little rotters on the sugar rush from hell. It’s essentially Peter Pan’s Lost Boys taking inspiration from the baddies in Mad Max.

Rufus Wainwright – Out Of The Game
We’re a hair’s breadth from Rufus Wainwright’s seventh album proper, and the man’s ear for melody is clearly as sharp as ever: Out Of The Game, lead single of the imminent LP of the same name, belies his burgeoning heritage in pop, opera and more – not to mention that trademark inflection that makes us want to don a scarf and take in a Carmen Miranda flick at our local art deco picture house.

Keane – Silenced By The Night
Keane were hot shit for a time, their slew of charting singles imbuing the popular charts with a hard-hitting dose of gentle piano balladry: Somewhere Only We Know, Everybody Changes, that other one with the claymation video. But then it all went awry, and the agreeable East Sussex chaps succumbed to rock’s hedonistic vices: lead singer Tom Chaplin developed a harrowing, Alan Partridge-style addiction to Toblerone (or something), and we can only speculate as to the demons that haunted the other two. Large debts run up at Gala Bingo? The advanced stages of Perrier dependence?

But the darkness has subsided, and Keane are back with a fourth album to remind us that a lot of things have changed since 2004, but others – namely the Keane formula – hasn’t budged an inch. That’s the sort of bloody single-mindedness we can respect.

Man On Fire, on the other hand, finds us on the fence: is its western-leaning acoustica effortless or pedestrian? We’re yet to tell if this lackadaisical number – initially charming though it may be – is ultimately worth the time and effort.

jj – jj n° 4
A Gothenburg band releases a single entitled Beautiful Life. We’ve been here before, have we not? It’s 1995, Nick Leeson has just been sent down and Ace Of Base have the charts in their sights with their follow-up to The Sign.

But this is different, man. jj are Ace Of Base blissed out in a rainforest somewhere. Tree stumps for drum machines; poisonous frogs for effects pedals; a carefully arranged and highly trained set of caterpillars for keyboards. Turn on, tune in and drop out.

And now some music: April Fool, lead single of Patti’s eleventh studio album – and her first since 2004 – Banga.