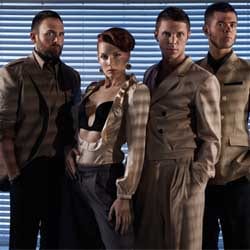 According to the ancient and venerable Mayans, 2012 is the year in which the world will meet its spectacular, dramatic and big budget demise. A downfall that critics will argue lacks a strong enough script to support its massive scope and inflated length, and one that almost matches Transformers 2 for sheer, cynical, mind-numbing, time-wasting, money-draining, soul-sucking stupidity.

Plus, we’ll bet they’ll try to make you pay extra and wear those bastard glasses to be able to appreciate it in 3D.

Just to, you know, put the Tracks column in some sort of context.

But hey, if this is to be our last year aboard HMS Earth, let’s make it one to remember, shall we? The impending apocalypse won’t keep a steamrolling Lana Del Rey from espousing heartbreak through her gloriously puffed-up lips – and neither will it derail The Doors from dropping a new track on their Facebook page (er, what?) – so let’s kick our collective Christmas hangover into touch and embrace the new year’s musical munificence with either a broad, beaming grin or a deflated sigh and a world-weary shrug. Whichever.

First track of 2012 and, like Natalie Imbruglia, we’re already torn. We like Scissor Sisters, we really do, but Shady Love – co-written with Alex Ridha (Boyz Noise) and Azealia Banks – sounds a lot like The Black Eyed Peas. A lot. By rights we should detest it.

Yet we don’t. We’re strangely drawn to Jake Shears’ rapping, to the brazenly imitable chorus and to the gimmicky promo featuring kids as adults (our favourite music video device, admittedly). Whether we’ll feel the same in a week’s time is anybody’s guess – indeed, we’re led to believe that Shady Love isn’t true to the direction of the incoming fourth Scissors album – but for now, we toast. And then shower.

School Of Seven Bells – The Night

But The Night – lifted from forthcoming LP Ghostory, the third in Seven Bells canon – is a touch hit-and-miss to our ears. Yes, it’s an uplifter and gratuitously dance-centric – kudos for that, at the very least – but at what cost? Former shoegaze elements have, by the sounds of it, been cast aside, and the track’s four minutes (intro aside) are standard fare, very much by the book.

Perhaps our expectations are too high, and we’re simply hoisting Curtis and Deheza with the petard of their own successes. Let’s hang fire until Ghostory.

Toy Left Me Behind

Well. We haven’t seen anyone look this bored on video since, well, Lana Del Rey, about 15 minutes ago. Ok, that’s hardly epochs, but that isn’t the point.

Point is prior to her pouting her way across YouTube looking like she’d been extracted from drinking cocktails in the LES to work in a call-centre in Leicester, bands always seemed so happy to be filmed.

Point is, in this video, Toy look well. Fucking. Bored.

But what’s more impressive is they keep up these remarkable levels of po-faced nonchalance for over seven and a half minutes. The stamina. Makes you proud. In some way.

Despite that, Left Me Behind is actually alright. It’s swirling and psychedelic and coloured with a sturdy, driving, krautrock influenced hue.

It is now the turn of FOE – sometimes also answering to the name Hannah Clark – to ball a fist of menace, pop and overdrive and box our ears with it: Cold Hard Rock is loud, bruising, borderline anthemic, and we’re simply bristling to get our hands on her imminent long-playing debut.

Sinead O’Connor – How About I Be Me

We’ve hummed and harred over this one. Few have a track record as colourful as Sinead O’Connor’s – that 1992 Saturday Night Live/Pope John Paul II incident still ranks up there with the very best/worst of them – but where are the equivalents in her back catalogue? Hers is a musical legacy still dominated by a 1990 Prince cover.

A harsh assessment? Perhaps, but not entirely unjustified in the light of How About I Be Me; a lite reggae offering so utterly toothless that it stands as a pop manifestation of Sinead’s pacifism. For a figure with such deeply held convictions and an outspoken history of expressing them, it just seems so lightweight; so compromised. Either that or we’ve missed the point entirely.

Don’t judge the cover. They say. Never the cover. The cover can mislead. It can send you off in a spiralling spiral of discontented confusion and depression.

Particularly if on the cover you’ve written ‘Trailer Trash Tracys’. As everyone keeps noting, it isn’t a very good name.

But this song (and previous single Wish You Were Red) are much better than that cover may suggest. They’re atmospheric and woozy and like being struck in the face repeatedly with a crimson velvet curtain. Which we can tell you, is not at all unpleasant.

But there’s a final hurrah: Grinderman 2 RMX, an album of remixes, reinterpretations and collaborations, from which this is taken, due in March.

Hmmm. Nick Zinner? Grinderman? Bellringer Blues? Honestly, all they need is to sell this as a brown paper package tied up with string, and it would truly be most of our favourite things.