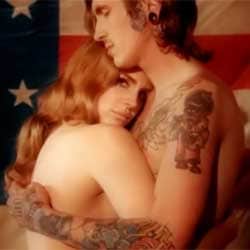 (This is the first part of a two-parter. Part 2 is now live here.)

Ha. Bet you thought that this was the last original material you were going to get from musicOMH tracks this annum.

And this isn’t just any tracks column. This is the proverbial extreme edition. In two parts. A month’s-worth of pent-up bitterness, joy and despair, a last hurrah for 2011 before it descends into a sherry-soaked oblivion of hideous knitwear, highly flammable decorations and Christmas songs whose festive spirits have worn down like so many fingernails down a blackboard.

But we shall not go quietly into that white night: the pop dearth of holiday oblivion is not yet upon us, and we’ve managed to muster just enough resolve to click through to a few music videos, sit through a few bars and smile meekly/grin broadly/sulk despondently/react violently.

You’d be forgiven for thinking this year was El Año de Lana, but it’ll be 2012 when the Internet’s favourite miserabilist drops her next world-devouring single and album, both named Born To Die.

It’s essentially Video Games with percussion, her (alleged) agents clearly having stumbled upon a formula with which they can (allegedly) print money and (allegedly) further consign Lana’s secretive, (allegedly) real debut LP to the annals of history. You didn’t hear it from us, right?

On the plus side, the agreeable Born To Die will shortly be accompanied by an “incredible” video conceived by the gorgeous siren herself. Apparently, it’s got a tiger in it.

Although it can’t be long till rumours abound that it wasn’t always a tiger, less than a year ago the same ‘tiger’ was attempting to make a career for itself as a cat, before someone suggested it might have more luck should it come back with pretty stripes and massive teeth.

In the meantime, do your best to hold back the tears through almost five minutes of nudie hipster embracing. Bless.

Imagine if humans could be twisty pink marshmallows. Imagine if Lana Del Rey’s lips could be made into a chic chapeau. Imagine if a song sung in French could be noticed by music journalists in England.

Well, Yelle manage the first two in Comme Un Enfant, a sweetly slice of their first album in four years, Safari Disco Club. The long player appeared earlier this year. It was duly ignored by music journalists in England. But if you – like us – love some electropop sassed to the max, this – surely the pinkest video ever recorded – will be for you and your ilk. Not only that but there’s a shot of an ice cream melting. These Frenchies really do think of everything.

Animated video of the year, which is no mean feat considering the glories set forth by the likes of Wye Oak and New Look in 2011.

Directed, edited and co-animated (!) by frontman Robin Pecknold – a true man of all seasons, it would appear – this eight-minute epic is nothing less than spellbinding. The curious tale of a carnivorous deer (as far as we can tell), it’s easily as captivating as any micro-masterpiece to grace these pages over the last 12 months, and adds layers to this already-dense highlight from the Helplessness Blues LP.

Lambchop If Not I’ll Just Die

The first single from what is widely expected to be the last ever Lambchop record is a pensive and melancholy thing. Alt. Country in all the ways you may expect, but with a swing that you might not.

Swing, in a finger-clicking, bow-tie undone, propped up at the piano with a whiskey in hand, kinda way.

Basically, it’s a bit like a folk-rock rat-pack. Imagine Sinatra, Martin and Sammy Lee sat on the porch in their dungarees, a banjo perched on each of their knees.

Taken from their debut EP Young Silence, Burial At Sea is another five minutes of dreamy, echo-laden beauty that languidly washes over you. It’s like lying on a beach, staring up at the (Mazzy) stars and being hit by a slowly diving wave of graceful noise.

In a good way. Not in a salty, damp, unhappy way.

It suggests, if we were in the business of making predictions about the future, that their debut album proper (due early 2012) should be something worth waiting for. But we aren’t. So we won’t.

Phenomenal Handclap Band’s 2009 self-titled unveiling flattered to deceive, smothered as it was under the weight of expectancy generated by the surprise success of the band’s debut single 15 To 20.

Unknown Faces In Father James Park, however – precursor to a sophomore album early next year – is denser, more ambitious and far more accomplished than its maligned predecessors: there’s a lot going on here, all of it good, and PHB (as we’ve suddenly decided to call them) seem to have nailed down the psychedelic, Mamas & Papas-esque irresistibility that graced a select few of their earlier efforts. Bodes well.

When all and said and done, December is a miserable time. It’s cold. It’s dark. It’s expensive. You’ll have to spend time with people you don’t like, and who you avoid, for good reason, for the other 360 days in the year. People will almost certainty attempt to enforce fun. They may even attempt to make you dress up.

The most wonderful time of the year? Fuck right off.

(This is the first part of a two-parter. Part 2 is now live here.)