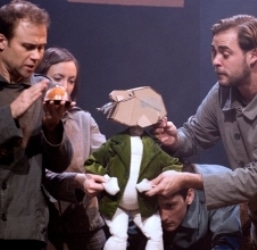 directed by
Mark Down
Though the creative use of puppetry is what theatre company Blind Summit is known for, puppets dont dominate their new production of 1984 they dont need to. In George Orwells terrifying vision of life in a totalitarian state, every aspect of life is subject to control.

The companys previous work includes the Charles Bukowski influenced Low Life and they also provided the puppets for Anthony Minghellas Madam Butterfly, but here the puppets are only part of the fabric of a witty, sinister production.

A neat framing device sees the story of the thought criminal Winston Smith and his whore Julia being performed by a travelling community theatre group as a lesson on what happens when you defy Big Brother.
Winston is a worker in the Ministry of Truth, where he spends his days rewriting old news reports in order to bolster Big Brothers omnipotence and erase the very existence of dissenters. He has been harbouring doubts about the regime for some time and embarks on a furtive relationship with the similarly disillusioned Julia. When they are together, they are human living, loving individuals not simply cogs in a vast grinding machine (it is fitting that the production visually references King Vidors The Crowd).

Winston and Julia rent a shabby room in the Prole District, where they believe they will be safe from prying eyes, at least in the short term, but Big Brother sees everything and it is with a degree of inevitability that Winston finds himself facing the harrowing prospect of Room 101 in the Ministry of Love.

Mark Downs production draws out the comedy of the situation, something that was admittedly not particular evident in Orwells text, and enthuses every scene with visual ingenuity. There are some wonderful executed moments and a scattering of chairs and some pieces of cardboard are all thats required to recreate the various scenes of the novel. A particular highlight is the staging of the rebel text The Theory and Practice of Oligarchical Collectivism using a white bed sheet and some cardboard signs; its a fast, funny and very inventive scene. And of course there are the puppets, simple yet emotive things. There are puppet birds and bunnies and a spindly child threatened by falling bombs. These are stringless puppets, each limb manipulated by a performer and the connotations of this within the context of the narrative are clear (though the company spell things out for those not paying attention).

The ensemble cast work well together and Simon Scardifield, as Winston, and Julia Innocenti, as Julia, convey a strong sense of being normal people in an abnormal world. The balance falters a little towards the end and, perhaps as a result of the framing device, the final scenes of torture suffer from being too stylized the full horror of Orwells denouement is diluted.

Despite that, this remains a potent, engaging and highly inventive rendering of a novel that has lost none of its edge or resonance over the decades.