A Moon For The Misbegotten @ Old Vic, London 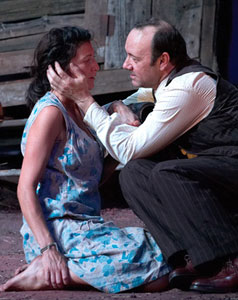 directed by
Howard Davies
Kevin Spacey has not had an easy tenure as artistic director of the Old Vic. The last production to be staged at the venue, Arthur Miller’s Resurrection Blues was a critical disaster that, unlike other shows the theatre has staged recently, also failed to do well commercially, closing a week early as a result. So a lot was riding on A Moon For The Misbegotten, the first production in what is now Spacey’s third year at the theatre.

A good job then that Howard Davies’ production of the play by Eugene O’Neill is such a strongly performed and emotionally charged piece of work. Set in 1920s Connecticut, Moon charts the fortunes (or lack of them) of Jpsie Hogan and her father Phil, Irish immigrants scraping a living on a farm owned disturbed drunkard Jim Tyrone.

The play is very much a character-driven piece, concentrating primarily on the relationship between Jim and Josie, yet written with O’Neill’s characteristic linguistic intricacy and subtle emotional shifts. Josie and her father maintain a constant stream of banter, liberally scattered with inventive profanities. Every character has a hidden part of themselves that O’Neill only gradually unveils, trusting the audience’s patience. Howard Davies, who also directed Spacey in O’Neill’s The Iceman Cometh ,directs with care, allowing the actors to truly inhabit their roles.

Eve Best is quite simply wonderful as Josie, a complex woman in the best sense, who uses her promiscuity to draw attention away from her genuine love for Jim. She appears intentionally large and ungainly on stage, and there is something very honest and admirable about her performance.

Colm Meaney more than holds up his side of the triangle as Josie’s drunken, scheming father. He imbues a potentially dislikeable man with real charm and an endearing vocal rhythm, even when his actions threaten to destroy Josie’s shot at happiness.

As for Spacey, this is the best work he has done at this venue. In his previous appearances (in Richard II, The Philadelphia Story and Natioanl Anthems), he always appeared totally miscast. But it’s easy to see why his turn in Iceman was so acclaimed after seeing how at ease he is playing Jim, oozing dangerous charm despite his character’s seeming desire to drink himself to death. He slides easily and believably from the light-hearted antics of the comically inebriated into the terrifying melancholy of the terminal alcoholic.

This an intimate, intricate study of relationships that just about warrants its three hour running time. The individual performances are all strong in their way, but it’s the chemistry between the three leads that makes it into something more memorable.