American Briefs @ Above The Stag, London 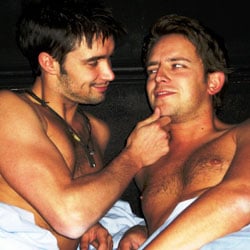 directed by
Peter Bull
The company known on the fringe as Shamelessboyz has taken on the upstairs room of The Stag, a venue in a tucked-away, forgotten nook of Victoria.

It’s the dream of many a fringe theatre company to have a venue all of their own. Costs would ordinarily prohibit, particularly in a time of Arts funding cuts, failing banks and general financial mayhem.

But as the programme for their first production at Above The Stag, American Briefs, proudly declares, “We’ve never received a penny in public funding!” It’s an impressive claim, as claims go.
Over the years the company, whose founders include several of this show’s cast, honed a formula for success. In summary, it is to stage short, sharp plays on gay themes, appealing to a core audience and giving laudable space to new writing.

Above The Stag proves to be a raked 50-seater space with fringe-standard blacked out walls and a slightly L-shaped stage space. Its box office doubles as the downstairs bar’s cloakroom. It’s snug and suits its newfound purpose – as the most centrally located fringe venue in London. It’s a welcome addition.

Tonight that core audience is packed in and extended a little to the left, taking in a wildly accessoried Su Pollard in the front row. Her guffaws, shrieks and running commentary throughout prove almost as entertaining as the US-imported shorts on the stage. She helms a bawdy audience that delights in interjecting; happily the actors are wily enough to banter back without losing their lines or the thrust of their dramatic poise.

Eight short dialogues and one monologue constitute the show, the work of five playwrights. Peter Bull’s pacey direction works poignancy well into the comedy settings, particularly in Howard Walters’ Your Friend Michael. Like Jack Heifer’s The Student And The Professor, it tackled the two faces of the passage of time, the one corrosive, the other healing as two former schoolfriends meet later in life to rake over the past and find something like catharsis.

Gareth Ap Watkins, a familiar face from previous Shamelessboyz productions, gets the bulk of the older man parts. He’s a lonely leatherboy offering his take on the world and one lad in one tableau; later he’s a played-for-laughs married professor bowled over by a confident student. Also familiar is Graham Townsend, a character actor of increasing distinction who runs the gamut from mildly autistic geek to balanced doctor.

The jockey-like figure of newcomer Leon Ancliffe unsurprisingly takes the bulk of the younger boy roles but easily fleshes out what might in other hands be cliched parts, switching easily from lovable sweetheart to airy rogue.

Cast and director alike confidently breeze through the laughs, which the audience lap up. American Briefs isn’t eyepoppingly graphic, preferring instead to rely on the strong writing to please its audience. It’s a good decision to go with a good first show; here’s hoping it sets up this new venue for future productions of similar quality.