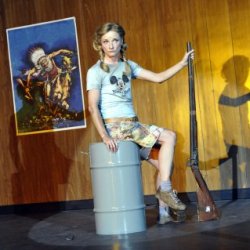 directed by
Richard Jones
Packed as it is with classic numbers, Irving Berlin’s 1946 musical Annie Get your Gun feels like an unusually conventional choice for the Young Vic.

But director Richard Jones’ production is anything but conventional; his is a refreshing – if only intermittently successful – new look at the work.

From the outset it’s clear that the tone of the piece will be tongue in cheek: four upright saloon pianos are arranged in a row at the front of the stage and kitsch wagon-wheel light fittings hang from the ceiling.
Jane Horrocks plays Annie Oakley. She’s a scrawny, filthy, hick when we first see her, but an enormously talented shot. When a travelling show asks for someone to challenge their best marksman in a shoot-off, she can’t refuse. Her opponent is the gorgeous, womanizing, bad man, Frank Butler and Annie is smitten. She beats him and is recruited as a rising star, leaving Franks ego bruised and lust in the air.

Horrocks voice is not as sweet and clear or as powerful as her predecessors in the role. Her performance is cartoonish but it has a goofy charm and she more than pulls off Doin’ What Comes Natur’lly and Cant Get a Man With a Gun. Julian Ovenden, as Frank, is clearly an outstanding musical theatre talent, but his slick style is somewhat alienating. His performance feels too polished and is a bit one-dimensional as a result, especially next to Horrocks insecure, hilarious, pining, gifted Annie.

Though Frank and Annie fall in love, sadly the sparks never really materialize between the pair. Somewhere between Horrocks klutz and Ovendens showboat the chemistry is utterly lost. Even the duet Anything You Can Do seems more like a stock routine than a romantic tangle.

There’s more zing between Liza Sardovy and John Marquez as Frank’s assistant Dolly and showman Charlie. The attraction feels more tangible between them as they spar and reconcile.

Ultzs long proscenium, letterbox-style set is functional and fun. He intelligently sends up the inevitable spacial limitations of cramming a big Broadway musical in to a venue like the Young Vic. The clutter and activity of the circus tent are delightfully realized by the miming ensemble and there are some moments of real inventon: sound effects are used to convey Annie’s extravagant and death-defying tricks and, during a cross country rail trip, a conveyor belt sends models of the Death Valley peaks, telegraph poles and petrol pumps chugging accross the stage to illustrate the passing vistas.

The dodgy racial representations of the original show are addressed too. All the Native Americans wear similar wonky, acrylic wigs drawing attention to the pastiche. If that wasnt enough to appease the PC brigade, both Buffalo Bill and Annies sidekick Jessie are played by black actors, and this pleasing multicultural casting deserves no cynicism.

Even Annie, despite faking her loss in the final competition with Frank’s ego and admitting that he is the worlds greatest sharpshooter, is brought closer to a modern female standard. She lets him win their shooting contest but only under great emotional duress and through gritted teeth.

The production is witty where it needs to be and the absence of big dance numbers doesnt register as a failing since the audience is enjoying Jason Carr’s musical masterminding of the new arrangement, arguably the greatest feature of the production. Taken on its own terms, Jones’ reworking is enjoyable as a theatrical experience even if it lacks the familar glitter and spectacle of a standard musical staging.