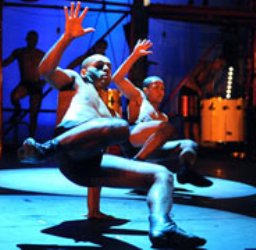 Bale de Rua is world dance theatre at its peak of pertinence and passion.

An exuberant exhibition of energy, community, story telling and history, it features 15 dancers – 14 men and one woman – who were all born and raised in Brazil.

They all contribute their voice to stories from their home county, stories told through fantastic music and inspired dance.
The music is unmistakably Brazilian: full of colour, melody and infectious rhythm. It is a sound that has graced a thousand summers, so familiar and immediate in its relationship with the country that anyone could pin the samba beat on a map. But there is a twist here, a twist which becomes a theme. We are constantly reminded that Brazil is a melting pot and that international influences are in found every aspect of life. Bach’s Prelude no.1 in C (Ave Maria) swings through to a samba; staccato guitar and steel-pans provide a blazing window to the new world.

The company, Cia de Danca Bale de Rua – which translates as Street Ballet – was founded in 1992 by Fernando Narduchi, Marco Antonio Garcia and Jose Marciel Silvia who each have a background in a different discipline, something which explains and illuminates much of the diversity on display here. Funk, breakdancing, classical, contemporary, accomplished acrobatics, Afro-Brazilian, samba, street (learnt on the street rather than in the sterility of a studio), hip-hop and combative capoeira are all elements in this rich, living mix. However, there is more than an occasional nod to less obvious styles: Asian, Indian and European are in here too.

Dance is only part of the picture. The various costumes also emphasize the cultural mix. Each costume reveals something of their shared heritage. Starting off in sharp, white suits – playboys of the coast – the dancers change into the summer shawls cum dresses of Catholic peasant women. Later they strip to underwear alone, bodies smeared with paint and spat upon, signifying the indignity and pain of slavery. Bound by the trade and to each other in the struggles they become tangled in a fabric web. Indigenous faiths are depicted through neon flowers under ultra violet light – the dance of goddesses and experiences of loss and hope come together in this vision. Far from being earnest, preachy or partonising, the show builds a sense of pride and courage.

Significantly, Cia de Danca Bale de Rua is a dance training and mentorship centre for young people in Uberlandia, the small city that brought them all together. They manage to fund their work through these tours around the world and give voice to a culture often forgotten from the dialogue at grass roots levels.

The Barbican’s Bite series has brought a steady supply of great South American artists and urban spectacles to London. The continued variety of the programme and its willingness to support these efforts should be praised.

From Brazil to the Barbican, Cia de Danca Bale de Rua, has entertained with its range of influences, talent and passion. It is like having a party with a purpose and we are happy to receive the invitation.