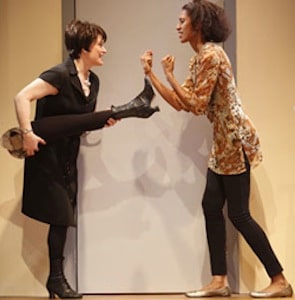 directed by
Ike Schambelan
The title of Kate Moira Ryan’s new play, Bass for Picasso, refers to an overly complex fish recipe that Alice B. Toklas created for Pablo Picasso; unfortunately it could just as easily refer to this overly complex play that keeps adding disparate ingredients to a dinner party setup to the point of narrative collapse. It isnt a completely bad play. In fact, parts are quite fun, but it is uneven in the extreme. It’s part farce, part melodrama, part social commentary and part love story, a concoction that ultimately doesnt add up to a complete, fulfilling whole. There’s too much story for things to quite balance out, though this isn’t for lack of effort from an able cast.

Anita Hollander and Felice Neals play Francesca and Pilar, a lesbian couple throwing a dinner party in order to taste the title dish, Bass for Picasso. Francesca is a disabled food writer for The New York Times and is working her way through parts of Alice B. Toklass famous and celebrity-rich cook book. Francesca is a bit of a perfectionist as a cook, demanding attention and timing. Pilar is her loopy, purposefully dense, life partner with a thing for Ikea. Thankfully unseen but all too often referenced are their young children, one a cross-dresser and one a sadist. Anita Hollander brings a cool detachment and the appropriate distain to the role of Francesca. Felice Neals does a great job with a role that veers further and further from reality.
Their guests include a single gay man, Terry Small as Kevin, a frustrated dramatist that has started drinking after a six year stint in AA. Instead of the author they expected, Kevin brings Bricka, Mary Theresa Archbold in a difficult role. Bricka is a recent widow whose dead lesbian lover left her with a son, threatening Republican parents, and a venomous hatred towards Francesca, who once had an affair with the deceased. Ms. Archbold does an adequate job, but the role as written whips too much between emotions. The final guest is Joe, play by Nicholas Viselli, an OB/GYN with a crystal meth-addicted boyfriend and a penchant for telling the truth. Mr. Viselli is wonderful and on stage way too little. The character of Joe, as written and winningly performed, is refreshingly honest and blunt.

Director Ike Schambelan has to expend too much effort in keeping the audience up to speed with the shenanigans and signaling where the characters are emotionally, which is important because the emotions dont arise organically. With this material, he is not able to create a cohesive experience.

Bass for Picasso often works its way into an impossible corner, only to cut to black and resume sometime later the latest irresolvable situation somehow resolved. It is a funny device once, but it soon becomes an annoying crutch for the show. And, unfortunately, this is the lasting impression of Bass for Picasso.