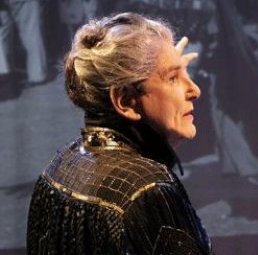 performed by
Bette Bourne and Mark RavenhillOne of the more hidden histories of our society is that of the lesbian, gay, bisexual and transgender community.

The reasons for this are numerous not least because of the illegality of homosexuality last century.

A Life in Three Acts couldnt come at a more perfect time; it is LGBT History month and the 40th anniversary of the Gay Liberation Front. However, this is much more a coming-of-age story than it is one of coming-out.
They play, if I can be called that, involves playwright Mark Ravenhill enjoying a simply staged, discussion with his friend and gay icon, the seventy year old, Bette Bourne.

The show is based on the transcribed, real-life conversations held between them over a year ago. Mark appears in high-tops, a checked shirt and pork-pie hat while Bourne is dressed in his sparkling Golders Green drag, golden sandals and is complete with finely coiffed hair and red lipstick.

Bourne is self-possessed, dignified, full of good humour and dirty jokes, recalling the good times and bad through his cockney croak page by page (literally the transcripts are in front of them both) and slide by slide as the photos flick on the screen above them.

Born in Hackney into a working class family, he was christened Peter at the start of the Second World War. He grew up with his theatre loving mother and beaten by his military father. He discovered his taste for performance and playing with boys during puberty: Scripture class was the picking-up place. Youd have a little J Arthur and that would be that. Lovely.”

Continuing the untraditional theme he eschewed a conventional stage career, despite performing at the Old VIc and with Ian McKellen, because he felt he was just doing his impression of posh acting (there is a recording of him reciting Shakespeare with perfect RP). He joined the Gay Liberation Front, lived in a commune in Notting Hill, dressed in drag for the first time and suddenly felt dangerous, even turning up in court on obstruction charges and when the judge demanded that Bourne remove his hat because he is a man, he refused. “Why?” barks the judge. “Because it matches my shoes,” he said.

He also founded the legendary drag troupe The Bloolips, touring Europe and living in New York in 1970s with shows like Lust in Space and Busby Berkeley routines with bananas. Indeed, we are even treated to renditions of songs old and new.

Bourne is pained when telling of the shocking, prolonged tearing of life and the marathon succession of lamentation during the AIDS crisis. This is then tied to the new sadness of losing all grasps of people who could only live in memory.

Ravenhill effectively keeps the momentum and affection up and guides the style and structure of the show. However he is less charming dipping in and out of character roles. He is often too enthusiastic and the scripted saccharineness turns sour. After one exceptionally emotional story the contrived spontaneity in the offer of a tissue jars the honesty and intimacy and dampens the entire scene.

Behind them both the old photos are brilliantly evocative from Bournes personal and professional life. Fresh, revealing in more way than one sometimes showing off his beauty and younger body but there is no exertion of sentimentality. Nor is there any preaching as you might expect from a reflection on ones life. There is a little too little on the experience of homophobia present and past especially as Bourne expresses his struggle between defiance and defeat. There is a one untouched subject; what is to come, the reality of mortality and for that a touch of melancholy hangs on the show.

Bourne is like a glorious, glamorous, living, breathing, gay granny who embodies a slice of history not found in the books, whose stories you want to hear over and over again. Enlightening, entertaining, deserving of reverence and respect, inspiring and absorbing and a small reminder of how little has changed this is surely a must-see for everyone.