Blond But Not Dumb? The Search For Elle Woods 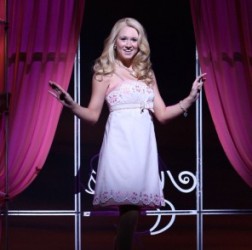 “What part of you thinks that Legally Blonde is about being subtle?” was screenwriter-cum-playwright-cum-reality -casting-show-judge Heather Hach’s retort to wannabe method actress contestant Celina early on in MTV’s Broadway casting series, Legally Blonde the Musical: The Search for Elle Woods.

Fortunately, with all its pink and its silly challenges involving dancing in high heels on cobblestone streets, singing while spinning, and handling chihuahuas, Legally Blonde seems to have sidestepped subtlety and found, within its hot pink wrapper of a show, a new brand of bubblegum that keeps its flavour even into a long eight-shows-a-week Broadway run.
Eight episodes, 15 blonde (and not-so-blonde) contestants, and countless omigods out from the starting block, the winner of MTV’s reality casting series made her debut on Broadway on Wednesday, July 23. Winner Bailey Hanks, one hell of a southern belle Elle, replaced Laura Bell Bundy, who had been wearing sorority girl Elle Woods’s pink pumps for over a year since the musical debuted on Broadway on 3rd April last year, but it wasn’t an easy road to the Great Blonde Way.

One of the show’s youngest contestants, 20-year-old Bailey, a South Carolina native and Coastal Carolina University sorority girl, had never seen a Broadway show before her stint on Legally Blonde, let alone performed in one. By midway through the season, however, Bailey, alongside fellow contestants Autumn Hurlburt and Rhiannon Hansen, had proven herself a frontrunner in the fight for Blondedom.

Still, it was the Elle-off between Autumn and Bailey on the stage of the Palace Theatre, performing numbers from the show for director-choreographer Jerry Mitchell in full costume with sets and current cast members, that secured Bailey’s status as most suitable for the role. Autumn had the voice and Bailey had the dancing razzmatazz (even if Mitchell dismissed her acting as “schmacting”), but it was Bailey whose winning personality shone through most on-stage.

No matter how much the contestants of a show are put to the test though, the recent trend in reality TV casting for Broadway and West End shows has set many a beleaguered show queen atwitter with anguished cries of “Parts for tarts!” and “To hell with Elle!” (Okay, not really.) What most viewers wouldn’t know from watching week-to-week, however, is that most of the contestants come from at least a tentative professional theatrical background. Though winner Hanks had never before made it out of community theatre, many others had. Autumn had been in the national tour of Little Women, and Reese Witherspoon lookalike Emma Zaks had appeared alongside judge Paul Canaan in the recent Broadway revival of La Cage aux Folles, directed by her father Jerry Zaks.

Playing the role of the show’s “mentor” and host, Haylie Duff turned out to be less than ideal. Having surely won her Broadway role as Amber Van Tussle in Hairspray largely because of her status as tweenybopper star Hilary Duff’s older sister and through her previous high-profile acting gigs, Duff came off as entitled and overly sure of herself, hardly the mentor 10 wannabe Broadway stars need when they’re auditioning and busting their butts to make it in a business where the gilded doors may seem all but shut to them.

Fortunately, the judges picked up her slack, providing professional cred enough to negate her whiny pretty-girl banter. Casting wizard Bernie Telsey, responsible for the impeccable original casts of Rent and Wicked amongst others, Legally Blonde librettist Heather Hach, and Legally Blonde chorus boy and Broadway vet Paul Canaan (with his jubilant cries of “Hit!” after standout performances) acquitted themselves well, emphasizing professionalism and polish over popularity.

Taking the reins over the casting room process, by which the least favourites appeared before the panel of judges before elimination, Bernie Telsey’s gentle let-down of, “We just don’t see you as the next Elle Woods” struck a chord of respectful dismissal that fit the constructive nature of the show, which rarely broke out into the riotous catfights one would expect on a show with 10 teen and twenty-something girls living together in an over-the-top pink hotel suite in Manhattan.

Bailey Hanks had never seen a Broadway show before her stint on Legally Blonde, let alone performed in one.

Though much repetitive Elle Woods-y drivel – and much lamenting on the part of villified contestant Cassie S. – had to be endured if one was to slog through the entire season of Legally Blonde, what caused the show to stand out was its behind-the-scenes look at the difficulties of preparing for a leading role on Broadway.

In order to suit the demands of a rigorous TV taping schedule, challenges were accelerated and amped-up even beyond the normal Broadway audition level. The contestants were put through a series of grueling preparative tests, with flamboyant vocal coach Seth Rudetsky, associate choreographer Denis Jones, and associate director Marc Bruni putting the girls through the wringer to challenge their triple-threat skills.

Having made it through all of the show’s trials, Bailey now finds herself with a six-month contract as Elle Woods on Broadway. She’s the youngest actress to have played Elle; Reese Witherspoon and Laura Bell Bundy were both in their mid-twenties when they took on the role. Still, Bailey proved she had enough sparkle to counteract the limits of her age in playing Harvard Law student Elle.

But Bailey’s not the only contestant with a future in Legally Blonde. Runner-up Autumn, the “experienced” contestant, who, at 28, was deemed un-sorority-girl-like, has landed a chorus role and will be understudying the role of Elle, giving fans of the reality show a chance, if Bailey’s ever out sick or on vacation, to see another of their TV favorites perform. Similarly, Rhiannon and Lauren have both landed roles in the national tour, though neither will be playing Elle.

It remains to be seen whether this instance of reality show casting will give Legally Blonde a boost at the box office, but the casting of Danny and Sandy in Grease on last year’s You’re The One That I Want, as well as, in London, the casting of Maria in The Sound Of Music via How Do You Solve A Problem Like Maria? and the title role in Joseph And The Amazing Technicolor Dreamcoat via Any Dream Will Do, made for boffo profits for their respective productions. My guess is that MTV and Legally‘s producers are no dumb blondes. From a purely money-making perspective, this method of casting big shows looks to be far from exhausted.

In the end, it seems reality casting shows are – at the very least – less harmful than celebrity casting in a cutthroat Broadway world that often emphasizes big names over big talent. The winners of these shows still come out ahead due to their own hard-earned achievements; they came from an open call casting process just like so many other Broadway performers after all. The difference is simply that the audition process was filmed. And though not every Broadway show is suited to this method of casting for its lead roles, it serves as a way for the ticket-buying public to get to know an actor or actress before they stake their hard-earned money on his or her performance. With ticket prices soaring (Legally Blonde‘s top ticket price is up to $120), maybe TV shows like this are what Broadway needs.

What’s next? A Spoonful of Sugar: Broadway Needs a Brand New Umbrella? Rose’s Turn: Search for a Stage Mother? Part Of Your World: Fins on Broadway? I say bring it on. There are plenty more unsubtle contestants where Elle’s pink pumps came from. Now that we Broadway geeks are left bereft of juicy TV gossip, what are the powers that be waiting for? My remote control is idle.