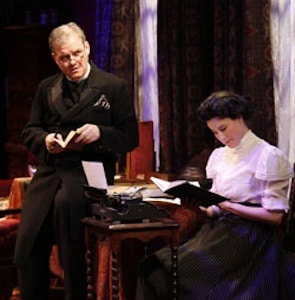 directed by
Tony Walton
Candida is one of George Bernard Shaws most famous and successful early plays, written and set in the 1890s. This revival, currently at the Irish Repertory Theare, feels fresh and lively, even if the politics are dated. Candida is the story of a comfortably married reverend and his wife and how their marriage, as well as his self-image, is threatened by the arrival of a young poet. The young man is desperately in love with the reverends wife Candida. If it all sounds a little serious, there is plenty of frivolity provided by the supporting players and light-hearted moments spread throughout the show.

Sam Underwood plays the young poet, Eugene Marchbanks, with an earnestness that is both touching and funny. He is all lanky limbs and open emotions. He is secure in the knowledge he would be better for Candida than her pious husband, and confounded by the knowledge that he wont be able to obtain her. Mr. Underwood has a firm grasp on the young man as tortured soul, both heartfelt and pompous.
As for the pious husband, Reverend Morell, he is played by Ciaran OReilly. Mr. OReillys performance lacks some consistency, vacillating at times between broadly confident to tightly controlled and self-doubting. Part of this is the writing of the play, but it is jarring at times.

Melissa Errico plays the lovely Candida, beautifully radiating chemistry with both Mr. Underwood and Mr. OReilly. She keeps the audience in the moment and grounds both leading men. Though Mr. Underwood’s and Mr. OReillys performances occasionally get out of sync with each other, Ms. Errico brings them back together effortlessly.

In the supporting cast, Brian Murray shines as Candidas father, Mr. Burgess. His Mr. Burgess is a large and imposing man, if slightly confused. In this Candida, Mr. Burgess is less the poster boy for rampant capitalism and more the befuddled businessman and father. Mr. Murray does a wonderful job bringing him to life.

Tony Walton is an experienced director and designer, and it shows. The set is full and rich without being overwhelming. The sets put the audience into the time period effortlessly. And Mr. Waltons direction is mostly spot on; the small space must support a lot of exits and entrances without interrupting the emotion of the moment. The director also handles the political subtext of the piece deftly. The politics of the piece are not ignored, but they are old arguments and not emphasized in this presentation. The reverends politics are presented as another facet of the his calling.

Candida is one of the famous shows that everyone has heard of but which people often dont get around to seeing live. If you havent seen it before, I heartily recommend this production. It is funny, engrossing and entertaining.