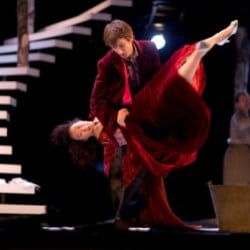 There are no pumpkins or fairy godmothers, instead this production, co-adapted by Still and Ben Power, takes its cues from the Brothers Grimm with a few borrowed myths thrown in for good measure.

The story goes as follows. Sweet, motherless Cinderella lives happily with her father until he decides to marry again.

His new wife dislikes Cinderella and treats her cruelly and her two daughters follow suit, bullying their new step-sister.
Then Cinderella’s father loses his fortune and the family are forced to move to a tiny, tumble-down cottage; there Cinderella becomes little more than a servant girl to her family, cooking for them, doing all the chores and forced to sleep in the ash of the hearth for warmth. Her only comfort comes from the snow pigeons that flock outside her window, whom she has befriended. Meanwhile the handsome young prince of the realm, having fallen for Cinderella in the forest while hunting a stag, only to then fall unconscious and forgot her, sets out to find himself a bride.

This all plays out on Sophia Clist’s shimmering, wintery set, with its towering silver birch trees and curving white staircase. The snow pigeons are made of paper and hang in a circle above the stage, like a large child’s mobile, though sometimes the actors wear the paper pigeon puppets as gloves so they can swoop and coo over Cinderella and perch on her shoulder.

The distinctive music for the production is provided by the Norwegian musician Terje Isungset, who sits in a small nest at the top of the stage playing an array of unusual instruments including an old bicycle, a mouth harp which apparently was made from part of a Second World War fighter plane and a trumpet made of ice. His unique percussion is an integral part of the show, driving it along.

The music helps to smooth over some of the cracks. At times the story-telling style of the show makes it difficult to connect with the characters, a problem that is intensified with Cinderella herself, who sometimes came across as a bit of a drip, forever dashing off to her mother’s grave and asking only for a twig as a gift when her father goes away on business. Indeed, Elizabeth Chan, as Cinderella, has little to do except look distraught and put upon and it’s left to the supporting cast to bring a bit of pep to proceedings. Daniel Weyman makes a decent enough prince and Grainne Byrne is particularly vicious as the step-mother while Tim McMullan acquits himself well in the difficult role of Cinderella’s father, a man who allows his daughter to be horribly mistreated. Still’s production at least acknowledges this strange kink in the story and McMullan’s performance does a good job of suggesting a man ground down.

The step-sisters (wonderfully played by Kelly Williams and Katherine Manners) are neither ugly nor evil, but young girls who act without thinking. The way they gang up and bully Cinderella, telling tales on her and taunting her, has the familiar feel of the playground about it, of inter-sister bitchery, which makes their gory comeuppance feel a bit unwarranted and extreme.

For, yes, Still (who also directed the similarly dark Coram Boy) and Power have included all those bits from the original Grimm brothers’ tale, all the nasty, bloody bits. But, while very young children or those who are particularly sensitive, may find it all a bit much, most children have a healthy taste for the macabre and the majority of the young audience members I eavesdropped on as we were leaving the theatre seemed to have enjoyed themselves, gore and all.

This is a superb alternative to panto, dark and atmospheric, yet hugely entertaining; a show that contains elements that will appeal to both children and adults. It has humour and recognisable human drama and a man playing a trumpet made of ice, what more could one want? If you go – and you should – be sure to leave your seats at the interval, for things spill over into the theatre bar in the most ingenious manner.