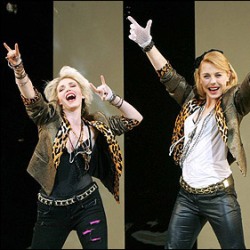 Desperately Seeking Susan is the latest addition to the West End’s rather crowded musical scene.

Based on the 1985 film starring Madonna and Rosemary Arquette, it has been brought to the Novello Theatre with soundtrack that plunders the back catalogue of Blondie.

Combining two current critical bug-bears, the jukebox musical and the screen-to-stage rehash, was never going to play in its favour when the reviews came out, but even so they were pretty damning.
The Guardian’s Michael Billington gave it a charitable two stars, complaining that you could “sense the strain of constantly fitting the numbers into a pre-existing plot. Instead of rising organically from the story, the songs feel grafted onto it.” He concluded, rather glumly, that it “feels like a business product calculatedly tailored to appeal to Blondie fans.”

Paul Taylor in the independent called it a “mess” that had been “pumped with phoney energy.” He closed off with a quip that the show should be better off being renamed “Desperately Avoiding Closure.” Charles Spencer in the Telegraph was, if anything, harsher in his appraisal, labelling it “lamentable” and simply couldn’t grasp the point of it, saying that “wonderful though Blondie’s hits are, they have absolutely nothing to do with the movie’s plot.” He could think of little to recommend it, and reckoned that the show would “leave most discerning theatregoers desperately seeking the nearest exit.”

Micahel Coveney over on WhatsOnStage.com was less vicious, admitting the show was passable if you submitted to the songs, though he too disliked its calculated attempts to appeal to certain markets, concluding that “the show’s got no soul.” Paul Vale at The Stage was also more willing to take the show on its own terms, and though he labelled it a “cut and paste job,” he made room to compliment the enthusiastic cast.

Surprisingly, one of the show’s, if not supporters, than least vitriolic critics, was the ever unpredictable Nicholas de Jongh at the Evening Standard. He gave it a solid three stars and at one point called the production “ingenious”, commenting on its “a stylised brilliance” and praising the way “the musical breaks free of familiar, romantic territory.” He picked some holes in it, singling out, as others had, the distractingly loud volume of the band and stating that the “chorus never seemed much more than redundant” but on the whole he was positive in his assessment, a lone upbeat voice.

Desperately Seeking Susan is booking at the Novello theatre, London, until April 2008