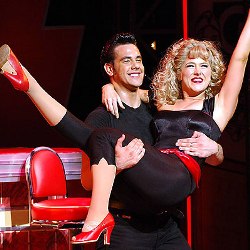 First there was Connie Fisher, selected by the public via the BBC’s How Do You Solve a Problem Like Maria? for the lead role in The Sound Of Music.

Then there was Lee Mead, who took his title role in the current West End production of Joseph and the Amazing Technicolor Dreamcoat after winning Any Dream Will Do.
And now we have the latest pair of reality TV stars to make it to the West End stage. Danny Bayne and Susan McFadden are the winners of ITV’s Grease Is The Word. Their prize? To play Danny and Sandy in the new production of Grease at the Piccadilly Theatre.

For the first two, the critical response has been (mostly) favorable and both productions have been commercially successful as well. Is the reality bandwagon running out steam, third time around? It certainly looks that way given the overnight notices. While Fisher and Mead had their detractors the response was positive in the main, but such a measured reaction has been less evident this time.The critical response to this new pair has been lukewarm to say the least, with both MacFadden and Bayne deemed to lack sufficient charisma to hold the audience’s attention.

Michael Billington, who had already used the opening of the show as the basis for a dispirited assessment of the current state of the West End, was predictably unenthusiastic, though not unfair, in his Guardian critique. Of MacFadden he said: “she has all of Sandy’s wholesomeness and sings prettily, but has a painfully limited range of physical expression.” He had kinder words to say about Arlene Phillips’ dance routines and concedes that Bayne displays “bags of energy” in his role.

Paul Taylor in the Independent also credits Bayne with a “certain sex appeal” but goes on to say that his performance “lacks the attractiveness of natural humour” before summing up the show as a “high-energy, high-decibel but completely unaffecting production.” Nicholas de Jongh in the Evening Standard is dismissive of both leads, sniping about McFadden’s “shrill singing voice”, but he singled out Jayde Westaby’s Rizzo for praise.

The Telegraph’s Sarah Crompton also had good words to say about Westaby’s performance, but is puzzled at what made people vote for Bayne and MacFadden, stating that whatever charisma they displayed on TV has clearly shriveled “in the spotlight’s harsh glare.” Bayne, she declares, substitutes “a curl of the lip for anything approaching acting” while MacFadden belts out her numbers “as if it were karaoke night.” Sam Marlowe in the Times is not quite so harsh in her two star review, but she still found the whole show “efficient but lackluster” and “disappointingly short on dazzle.”

Michael Coveney on WhatsOnStage.com was quite taken with Bayne, concluding that he has “a powerful stage presence and his command of the moves is total” but off-handedly dismisses McFadden as a “dumb cluck.” Paul Vale in The Stage was marginally kinder, concluding that the problem is less with Bayne and MacFadden then with the production as a whole. “By all means,” he sums up, “give the West End new stars via an audience vote, but don’t drop them into overworked, second-hand shows like this.”