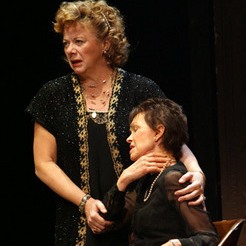 There were few surprises at this year’s Critics’ Circle Awards.

Gongs went to Michael Grandage for his work both at the Donmar and for the Donmar’s West End productions at Wyndham’s Theatre.

Margaret Tyzack repeated her win at the Evening Standard Awards with a Best Actress nod for The Chalk Garden (though this time it was not split with co-star Penelope Wilton, as it was then), also at the Donmar, and Kenneth Branagh picked up Best Actor for the Grandage-directed Ivanov.
Best Play went to the critically lauded August: Osage County by Tracy Letts, a production staged originally in Chicago by the Steppenwolf Theatre Company before transferring to Broadway and then to the National.

Best Musical went to the revival of La Cage Aux Folles, a production that started life at the Menier Chocolate Factory before moving to the West End’s Playhouse Theatre. While Douglas Hodge at first reprised his role as drag artiste Albin on the production’s transfer, he has now been replaced by Graham Norton.

The most interesting result was in the Best Shakespearean Performance category. The critics were clearly split on this one and in the end the prize was shared between David Tennant for his RSC Hamlet – a role he was unable to play for much of its West End run as a result of a back injury, requiring his understudy Edward Bennett to step in at short notice and Derek Jacobi for his performance as Malvolio in the Donmar’s West End staging of Twelfth Night.

Despite his absence, the critical response to Tennant’s performance, both at Stratford and for his brief return to the part before the end of the London run, was incredibly strong and though there had been murmurs of discontent from some corners about stunt casting when the production was first announced, Tennant’s stage background shone through.

Other gongs at the ceremony, which took place at the Prince of Wales Theatre on the 27th January, went to Alexi Kaye Campbell for his superb debut play The Pride, which had a short run at the Royal Court’s upstairs theatre late last year, and to Ella Smith, as Best Newcomer for her role in Neil LaBute’s Fat Pig, a nod she too also received at the Evening Standard Awards.

Neil Murray picked up the prize for Best Design for his work on Kneehigh’s staging of Brief Encounter in a Haymarket cinema.

The awards in full are as follows: