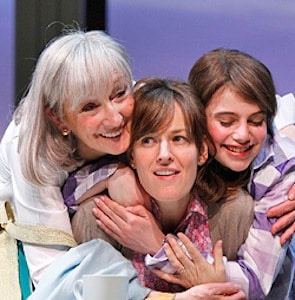 directed by
Jonathan Demme
The experience of watching Beth Henley’s Family Week, a play that was premiered about a decade ago and which has never been published, is similar to visiting the rehabilitation center in which the play is set: everyone’s got issues, and no one seems, ultimately, to be in control.

Henley’s well-meaning but aimless drama focuses on Claire (Rosemarie DeWitt), a patient at a rehabilitation center who invites, as part of her strict program, her mother, sister, and daughter to be a part of her treatment. It’s unclear exactly why she’s taken up residence there. She’s got apparent anger issues, but she may also be abusing substances and seems to have some sort of eating disorder. No matter, she’s an emotionally volatile woman, estranged from her daughter, who’s living most of the time with her father (Claire and her husband Jim are on the brink of divorce).
The play, directed by filmmaker Jonathan Demme in his stage debut, seems hardly worth revisiting. Over the course of the play’s 85-minute running time, there are a number of familial squabbles interspersed with scenes of group therapy, in which the actors take turns playing the group leader in a misguided, oversimplified examination of the validity of therapy as a practice, but none of the proceedings are driven forward by any measurable conflict.

Though young Sami Gayle grates as whiny young Kay, the rest of the cast that Demme’s assembled is top-notch. Kathleen Chalfant, as always, exudes headstrong charm as flawed mother Lena, and Quincy Tyler Bernstine is dry and appropriately rebellious as Rickey, Claire’s sister.

In the role of Claire, Rosemarie Dewitt, nervy and angst-ridden, turns in an amiable performance that makes us want to know more about her character’s situation. Her end-of-the-line hopelessness compels but ultimately leaves us wishing we could find more concrete reasons to care about her murky plight. A last-minute, tacked-on plot reveal involving Rickey’s relationship with their father (not even a reveal, as we never learn the details) only adds to the mystery clouding the evening from any sense of true revelation.

Though Demme keeps the play running smoothly toward its conclusion (the production, at least in its staging, rarely feels stagnant), Henley’s play can’t be saved from its own devices. Though everyone in Claire’s family seems to be at each other’s throats, there’s no redemption to be found and no underlying explanation for any of their grief. Despite Henley’s obvious investment in the topic at hand and the occasional heart-walloping monologue, Family Week would require a strong dosage of dramatic therapy – namely, rewrites – before it could ever truly make an impression.