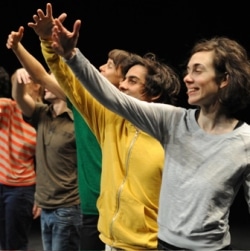 choreographed and directed by
Ivana Muller
The performance begins with a bow. Six smiling people stand in a line on stage and slowly, very slowly, soak up the audiences applause.

Ivana Mullers performance piece is interested in the half-way space of the curtain call.

The show is over, but not quite over, and the actors themselves do not know whether they are still performing or not. In this space, the rules and relationships of performance change: the actors can acknowledge the audience and each other in new ways. Yet they are not free. There are patterns to be followed, there is a system to things.
Croatian choreographer Ivana Mullers entertaining Playing Ensemble Again and Again is not a dance piece in a conventional sense. There is not much in the way of actual dancing. Instead the six performers move in slow motion, bowing and smiling, clapping the technicians and each other, trapped in a kind of theatrical limbo.

Once the whole process has been completed, all that is left is an empty stage and the sound of the actors voices behind the curtains. Then it begins all over again: the same slow motion movements, the same bowing, clapping, and smiling.

What prevents the piece from becoming too tedious for words (because visually it is very repetitive) is the script. Muller allows the six performers to speak, not to each other, but to voice their thoughts. Each actor is wearing a mic so their voices sound over-loud in the compact Lillian Baylis Studio, and eerily detached from the speakers. Their words however are usually quite funny. Sometimes they muse philosophically on the nature of performance in general and sometimes their thoughts are more specific in nature: one actor wonders where he put his backstage bottle of cognac.

Muller allows a little flicker of narrative to enter proceedings, though she never goes so far as to give her characters names or anything approaching a back-story. The performers describe how they are actors in a long running show of some description. Sometimes they fret over their billing and how much actual time they spend on stage; other times they describe the process of touring, the stream of new cities and hotel rooms.

Though their actions remain unchanged, time shifts. At the start they are young and keen, by the end they have aged, grown older together, married and divorced (at one point one of them appears to have delusions of being a vampire) but still they perform, they still continue going through the motions, taking their bows.

Though the words are spoken without emotion, in the same smiling, toothy tones throughout, the script is diverting and funny enough to stop the piece being a trudge and while 70 minutes seems an over generous running time, its a strangely engaging piece on its own terms.

Interestingly and amusingly, at the end, when the lights have dipped for the last time, the performers return to the stage and take their bows in a conventional fashion, though its difficult to watch this without reflecting on all that has gone before.