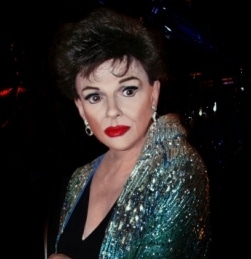 These might not be the first terms one would expect to hear used in regards to a Judy Garland impersonator. But they are all true.

It is 40 years since Judy Garland passed away aged 47. But in a way she still lives: stories are still being told about her life; tributes and compilations come and go but legends last forever.
Jim Bailey continues this thread in his wonderful cabaret production.

He comes on stage in heels, wig and heavy makeup – the works – and delivers an outstanding, mesmerizing show. Before it begins one might wrongly suppose that this will be just another tired queen doing campy impressions. As the show opens you might be forgiven for limiting the expectations of the experience to that of a talented copycat artist. That would be a mistake. Bailey’s performance is not just a well obserevd portrayal but an engaging, magnetic recapturing of Garland’s legend. He calls himself an illusionist. I think he’s right.

Spookily, in this anniversary year, the performance is set in the immediate present with Judy around the age she would have been in the 1960s, as if she never passed and never aged. Bailey intersperses his act with brief stories of Garland’s time at MGM and her personal life. He is sassy, always improvising, working with the audience and the bar, indeed behaving with such natural, erm, ‘Judy-ness’ that you often forget you are watching a man who should have his retirement plans wrapped up.

The first half is a little patchy, but the band and Bailey soon warm up considerably. Delivery of each song feels heart-felt and fresh. The occasional hammy, over-rehearsed gesture is no longer an issue as Bailey takes his audience through the Garland repertoire, including Over the Rainbow, Get Happy, The Trolley Song and The Man that got Away. There are also surprises, such as a resonant versions of Stephen Sondheim’s I’m Still Here and Oscar Hammerstein’s Old Man River.

It’s a shame that he cannot belt out the higher notes as Judy once did, but this is perhaps down to the limitation of Bailey’s own age (and gender?) It is also a shame that he didn’t have a bigger, stronger backing band.

The show provides a pertinent reminder of the long-lasting impact of Garland’s sacrifices and her contribution to both queer culture (it is also 40 years since the Stonewall riots) and global entertainment. London-based queer arts impresario Dickie Beau’s wonderful, dark takes on Garland’s autobiographical recordings marked a new shift in our relationship with camp legends. Rufus Wainwright came to London for his Judy Garland Live at London Palladium show and provided a self-reflective, rendering of her show in his own inimitable style. But Bailey brings us back to good old fashioned homage.