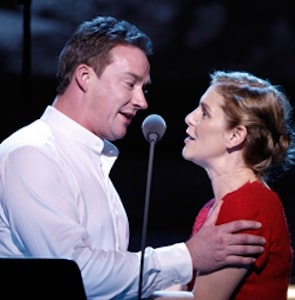 directed by
Lars Rudolfsson
If there’s one word to describe Kristina, the theatrical concert that took place on September 23 and 24 at Carnegie Hall, it’s “ambitious.” Written by Benny Andersson and Bjrn Ulvaeus (the two B’s of Swedish pop group ABBA), the piece was originally presented in Sweden in its original language and is making its English-language debut with lyrics cowritten by Les Miserables translator Herbert Kretzmer.

Based a series of popular Swedish novels by author Vilhelm Moberg, the story of the musical, presented here in concert form, revolves around a group of oppressed Swedish peasants who decide to move to Minnesota to work the land.

Kristina, the titular heroine, is the passive recipient of a whole mess of misfortune as the evening progresses. Most of the story happens to her. In fact, she finds herself pregnant a total of eight times over the course of her life.
When Kristina and her husband Karl Oskar move to America, things aren’t quite as they seemed for the hopeful immigrants. Karl Oskar’s brother Robert, who treks westward in search of gold, finds himself ruined. And Kristina and Karl Oskar, try as they may, have some rather maddening fertility issues (cue somewhat heavy-handed parallels between pregnancy and immigration).

Despite plenty of misfortune, the group holds fast to their religion and to their workaday existence, striving for something better which may or may not ever come to them.

It’s difficult to tell how a show like Kristina might fare if given a full staging on Broadway, as seems to be the projected goal of the concert’s producers. Despite a strong, slightly ballad-heavy score by Anderson, Ulvaeus, and Kretzmer, this concert version does little to sell the plot of the show, which features a fair amount of plot points with very little character development along the way.

Projected plot updates and a fair share of explanatory monologues from the character of Ulrika, an aging whore who becomes one of Kristina’s best friends, do little to fill in the gaps between songs. A visionary director – with a knack for episodic, visually impressive work – would be needed to mold this impressive score into something narratively satisfying. Still, Kristina is a musically intriguing piece of work and deserves to be heard by a wider audience.

Fittingly, as the immigrants’ plight darkens, the story also becomes more engrossing. Throughout, the score compliments the story beautifully. The bright, beautiful ballads that begin the show give way to more anthemic numbers about striving for something better. The signature ABBA flair for songwriting is in evidence, only there are fewer synthesizers to be found in the American Theatre Orchestra, beautifully overseen by renowned theatre conductor Paul Gemignani.

In the title role, Helen Sjholm impresses, her unique, crystalline voice hitting all the right notes. Though she’s a bit old for the role she originated about fifteen years ago in Sweden, it was a genius idea to bring Ms. Sjholm’s experienced portrayal of the part along with the show to the United States. Her second act number, You Have To Be There, brought the house instantly to its feet even as the piece neared its end. As her husband Karl Oskar, British singer Russell Watson is similarly impressive, with a robust and vigorous voice.

As Ulrika, Louise Pitre (who originated the role of Donna in Benny and Bjrn’s Mamma Mia!), blows the lid off the place with her showstopper Never. And the surprise of the evening is Kevin Odekirk, who, as Robert, has the chance to sing some of the evening’s most beautiful songs, including Down To The Sea and Gold Can Turn To Sand.

It’s too early to tell what Kristina‘s fate, ultimately, will be, but based on the response to its concert presentation at Carnegie Hall, the piece seems likely to have a further life. Clocking in at near three hours, Kristina rarely bores and is at once musically complicated and easily accessible, two elements that, when combined, usually spell success.