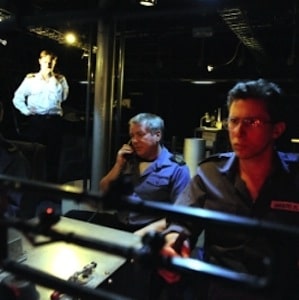 directed by
Mark Espiner and Dan Jones
Put out the light, and then put out the light. Sometimes the most audacious thing a theatre director can do is to plunge the audience into blackness. For, in the dark, the mind creates its own lasting horrors.

In Kursk, only a few pitch black seconds patterned with glimmering green are sufficient for the audience to gain an awful inkling into what the last days of a group of Russian submariners, trapped at the bottom of the Arctic Ocean, may have been like.

Inspired by the submarine disaster of 2000, Bryony Lavery’s new play sees her collaborating with Sound&Fury, a company with a good track record in creating bold theatrical experiences.
The play is set aboard a British submarine that has been tasked with covertly photographing the Kursk, a state-of-the-art Russian nuclear sub.

The Young Vic’s Maria studio has been transformed into a two-tier space in which the audience are free to move around. It is possible to go down amongst the performers and watch the scenes up close or stand on the walk-ways and watch everything unfold from above.

The designer, John Bausor, has created a believable, immersive interior. There are bunk beds, a mess table, captain’s quarters, flickering control panels and a periscope, while the directors, Mark Espiner and Dan Jones, have successfully created an atmosphere that is both claustrophobic one learns to flinch at every clink and clang but also everyday, ordinary, one of routine. The men onboard the sub mock each other; they banter and bicker; they observe little rituals; they sing in the showers; they wait eagerly for messages from home, for the telegrams from their wives and partners which are their only contact with the world outside the reinforced metal walls. The cast convinces as men obliged to live in close proximity to one another.

By observing the lives of the British crew, the unseen crew of the Russian submarine are also humanised and paralleled. So when an explosion sends the Kursk plummeting to the seabed, one can easily picture a similar set of men, trapped but alive, helplessly waiting for death or rescue. This is the basis of the play’s main moral dilemma: whether the British crew should do what they can to save these men, even if it means betraying their presence and jeopardizing their mission. Borders and orders become irrelevant, the Russians are human beings who might possibly by saved.

Alongside this, Laurence Mitchell’s commanding officer is seen grappling with whether to let one of his crew know some bad news from home. It seems smaller in the scheme of things, yet just as emotionally potent.

This is a thrilling piece of theatre making on two counts, for it is just as tense as any cinematic exploration of this masculine, underwater world, like The Hunt for Red October or the gruelling Das Boot. It is also thrilling in the amount of control it affords its audience; one dictates one’s own experiences, choosing when to zoom in and when to pull back. It is in this way that the visual punch line to a rather good gag featuring a mysterious noise which must, by necessity, be tracked down and accounted for, became obvious far earlier to those audience members standing directly above the offending individual than to those standing way across the studio.

The real beauty of the production is in its details and the seemingly authentic world it so completely creates. There is humour here, but also horror, as the dark, last days of the men of the Kursk are left to the imagination to work its worst on.