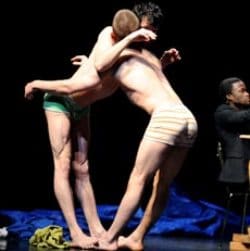 directed by
Alain Platel
The average London commuter would have been forgiven for not realising the piece was actually called piti!

This is because on all of the posters the show’s title was swamped by that of the company, Les Ballets C de la B.

But it’s easy to see why that name was championed. Since Alain Platel founded the company in Belgium in 1984 it has achieved international acclaim for its innovative productions that cross-fertilise artistic disciplines, and employ a ‘popular, anarchic, eclectic house style’.

piti! is a new take on Bach’s St Matthew Passion in which the composer’s story of Christ’s last days on earth is not merely reproduced, but rather reinterpreted.
It remains a meditation on suffering, but composer Fabrizio Cassol has chosen to focus upon the suffering felt by a mother (Mary never appears in the original) at seeing the sacrifice of her descendants. The mother is played by a soprano, whilst a male and female play her two offspring. Whilst the man is Jesus, by making him a counter-tenor, and giving him a ‘sister’ with whom he sings at the same pitch, we witness two souls sharing a common destiny.

The drama is played out by the singers and dancers who invite us all to meditate on suffering by witnessing the ‘physical translation of over-intense emotions’. With the cast members on stage throughout, piti! starts with all the dancers sitting still before one starts to writhe frenetically as if possessed, bringing to mind such biblical quotations as ‘The fool has said in his heart there is no God’. Then, stripped to their underwear, the dancers literally grab, twist and tear at each other’s flesh, before bending right over to the ground and turning their shoulders back on themselves.

The music is played by a small orchestra whose instruments broadly represent a Baroque orchestra in microcosm, only with the addition of an electric guitar, drums and an accordion. Cassol’s music ranges from pieces that sound very close to the ‘original’ to others that are entirely new and embrace a variety of musical styles including ska. At one point, the flute begins with what sounds like the introduction to one of Bach’s recitatives before the orchestra then bursts into a more triumphant rock number. Even at its most exuberant, however, the music still feels slightly subdued, as befitting the subject matter.

Concert singer Claron McFadden, whose repertoire includes both traditional and modern singing, was an excellent choice for the mother as she proved adept at adjusting her voice to suit the unique stylistic requirements of this piece. Monica Brett-Crowther as the ‘daughter’ had a beautiful rich voice, whilst 19-year old Serge Kakudji more than proved why he is such an up-and-coming counter-tenor with some exceptional singing. Jazz flute player Magic Malik also contributed a more popular style of singing, which contrasted well with the others’ more classical strains.

The one weakness was that so many of Platel and Cassol’s ideas went into every single movement that many got ‘lost in translation’. Such an abundance of points were packed into this display that I suspect every audience member missed a lot, and this allowed the production to be criticised for being incoherent. Since so much of the St Matthew Passion had been changed anyway, I felt that little would have been lost by dropping the German altogether, and performing it in English. This might have made the drama more comprehensible, and even if this wouldn’t have worked if the production was touring internationally, surtitles could have been used.

But the piece was so rich that it enabled audience members to apply their own interpretation to it, and to draw out what was important to them. I, for example, found myself warming to the various tableaux that were formed, which alluded to events such as the washing of the feet; wincing as I saw the ‘sister’ brandishing an axe that foretold of the brutality to come; and understanding for myself how intense suffering really can be by (paradoxically) witnessing the intensity of feeling experienced by couples locked in intimate embraces.

It is possible to highlight various flaws in piti!, but it is very much a piece that transcends its imperfections. Indeed, with no interval, I would defy anyone to emerge from this two-hour drama not feeling that they had undergone a deeply moving experience, and one that was highly personal to them.