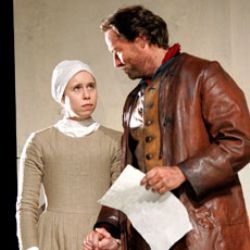 As this belated blast of icy weather finally abates and venturing outside one’s living room becomes a more appealing prospect, London theatregoers can look forward to a particularly tempting array of new (and new-ish) productions.

A new artistic director at the Globe and some well-earned West End transfers are among the obvious highlights of the coming season.

But things get underway with two returning shows, not long away from London stages.

At the end of March, Christian Slater goes back the asylum as Terry Johnson’s critically and commercially successful production of One Flew Over The Cuckoo’s Nest begins a second London run. Now playing at the Garrick, ER’s Alex Kingston will be taking on the role of the formidable Nurse Ratched in the stage version of Ken Kesey’s cult novel, and, as before, the supporting cast will favour comedians, most notably the always endearing Owen O’Neill.

The Royal Court’s sell-out show My name Is Rachel Corrie – Katherine Viner and Alan Rickman’s stage adaptation of the writings of the young American activist – also returns to London after its US run was ‘indefinitely postponed,’ presumably for its emotive handling of the Israel issue. Megan Dodds will again be taking the role of Corrie in a thought-provoking and relevant production that should be checked out at during its brief run at the Playhouse.

Personally Dawn French’s comedic output over the last few years has left me colder than a cameraman on March Of The Penguins, but she has a strong track record when it comes to her stage work and Carmel Morgan’s Smaller, a ‘comedy with music’ about two sisters caring for a disabled mother, sounds like it has the necessary darkness to override the taint of all things Dibley. French will be joining best mate Alison Moyet at the Shaftesbury Avenue Lyric from the end of March.

The late Arthur Miller’s last play Resurrection Blues has been one of the big disappointments of the year to date, though how much of this is down to the writing or to Robert Altman’s distinctly flimsy Old Vic production is debateable. Fortunately the RSC’s recent production of The Crucible provides a reminder of just how vital Miller was at his best. Featuring, by all accounts, a captivating central performance from Iain Glen in the John Procter role, the show will be transferring to the Gielgud in April, right on the heels of the company’s generally well-received series of Comedies at the Novello (the highlight of which was undoubtedly a sparkling staging of A Midsummer Night’s Dream).

Dawn French’s previous comedic output has left me colder than a cameraman on March Of The Penguins.

Output at the National has been patchy of late, particularly in terms of its largest space, the Olivier. Both David Farr’s The UN Inspector and the 1920s Hollywood comedy Once In Lifetime looked wonderful but were muddled affairs, uncertain in tone. Trevor Nunn’s production of Peter Schaffer’s The Royal Hunt For The Sun, concerning the Spanish conquest of Peru, definitely sounds lavish enough to fill the vast Olivier auditorium but will also hopefully have the dramatic substance the previous shows have lacked. There will also be further opportunity to see Mike Leigh’s Two Thousand Years as it transfers back to the Lyttleton after a national tour.

Over at the Barbican, their Beckett centenary season is already attracting positive write-ups and April will see twin big-hitters Waiting For Godot and Endgame staged in the main theatre alongside a series of shorter works in the Pit. But it’s at the Globe where things get really intriguing. Last year Mark Rylance bowed out of the role of artistic director (in a rather disappointing fashion some would say); his replacement, Dominic Dromgoole has done some excellent work for the Oxford Stage Company but is he up to the task? His debut season doesn’t immediately get the pulse racing; the Edges Of Rome season groups together Coriolanus, Titus Andronicus and Antony and Cleopatra, not obvious choices, but he’s made some interesting casting decisions (Frances Barber as Cleopatra sounds very promising indeed) so we shall have to wait and see.

The trend for the back-catalogue musical shows no signs of abating as April sees the arrival of Movin’ Out, a show based around the songs of Billy Joel.

Christian Slater excepted (and I’m not sure he really counts anymore), there’s very little obvious big-name casting going on at the moment; the pool of Hollywood types keen to cut their teeth on the London stage seems to have dried up for now. But the trend for back-catalogue musicals shows no such signs of abating, with the arrival of Movin’ Out at the Apollo Victoria. Based around the songs of Billy Joel, the Tony award-winning show is choreographed by Twyla Tharp and contains a greater reliance on dance than is usual in such productions.

Sticking with musicals, the tail end of April will see some major West End reshuffling, with Chicago vacating the Adelphi to make way for a revival of Andrew Lloyd Webber’s Evita, kicking the bland Motown show Dancing In The Streets out of the Cambridge Theatre in the process. May then sees the one year anniversary of the Billy Elliot musical, an occasion which will be marked by a one-off return performance by the original three Billys each taking scenes.

As ever there’s plenty to excite in London’s off West End and fringe venues. After a well-acted but overly sedate revival of Hugh Whitemore’s The Best Of Friends, Hampstead Theatre returns to staging new writing with the UK premiere of Hilda, the story of an upper-class woman’s intense relationship with her children’s nanny, by Franco-Sengalese playwright Marie NDiaye. This is followed in May by Crispin Whitell’s atomic comedy Clever Dick.

The Almeida will follow Tennessee William’s take on domestic comedy Period Of Adjustment with David Hare’s new adaptation of Gorky’s Enemies. The Lyric Hammersmith continues its run of appealing and magical productions with a stage take on Neil Gaiman’s The Wolves In The Walls and another chance to see the unique, bewitching Aurelia’s Oratorio. Meanwhile, that other bastion of new work, the Bush, maintains a typically eclectic line-up, the most intriguing upcoming offering being Sapphic concoction Crooked by Catherine Trieschmann.

Richmond’s ever reliable Orange Tree has been on a roll recently, staging two superb productions in a row: James Saunders’ A Journey To London and a revival of JB Priestley’s The Linden Tree. Can they make it third time lucky? Well, the success of the latter was principally down to the performance of veteran thesp Oliver Ford Davies, and he is slated to play the title role in their upcoming staging of Larkin With Women. So, yes, in all likelihood they can.