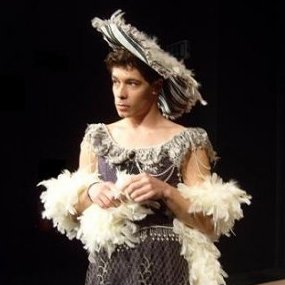 cast list
Ruaraidh Murray and Spencer Charles NollIn his new play Lord Arthur’s Bed, Martin Lewton has plucked a tale of forbidden love from the history books and given it a modern twist. Sometimes this approach is very effective yet at other times it can seem highly contrived.

The play is set in the flat of Donald and Jim, a gay male couple who have stumbled across the story of Frederick Park and Ernest Boulton, a pair of Victorian gents who went by the names of Fanny and Stella.

Inspired by their tale of transgression, Jim proceeds to relate it to the audience ‘via webcam’, taking on multiple characters with Donald in tow.
Of course, the contemporary couple, despite being civilly partnered, have their own troubles and also wrestle with social taboo, identity issues, shame and discrimination. Lewton’s play also examines the tensions within their relationship.

It’s an interesting concept in trying to spin a tale of two times in one city within the space of 70 minutes, neither story is well served. The text and performances are pushed to the fore since the set is sparse (just a bed and a chair), there is no music and barely any lighting changes. Despite this pared down approach there is a lack of connection with the characters, the whole thing is lacking in intimacy.

At times the play feels a bit too much like an educational exercise as the play heavy-handedly highlights the similarities and differences between social attitudes in the 19th century and today.

Lewton cites the scandal created by Oscar Wilde and his subsequent imprisonment but gives few other examples of gay pride or persecution from the past. Fragmented as it is, the play fails to be significantly informative nor to allow the audience to draw its own conclusions.

The narrative structure is partly to blame. Lewton’s device of shifting from the past to the present never hits the right balance (also one cant help but feel that a couple blackberried yuppies like these guys wouldn’t be using a webcam – it’s a touch too ’90s).

The appeal of Fanny and Stella’s story is just too great and the contemporary couple suffer in comparison – there’s just no competition between upper-class Victorian transvestitism versus the state and the fruitless, 21st century tiffs of city workers.

The actors, Spencer Charles Noll and Ruaraigh Murray, recognise this and relish in playing the historical characters. Simple and pretty as Donald, Noll is vivacious as an East-end landlady or when playing Stella. Moments of hilarity ensue and the energy rises but then it plummets once more when Donald and Jim quit role-playing to have a little, expository spat.

Lewton’s play succeeds in bringing to life a lesser known story from gay history but the play struggles to creating two equally compelling narratives and one wonders if the stories could have been better told separately. The tale of Fanny and Stella has obviously been meticulously researched and as a direct, unmuddled period piece it might have been easier to engage with the play more deeply. Brits do love a costume drama after all.