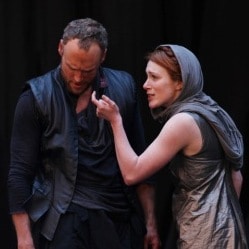 directed by
Lucy Bailey
A few years ago Lucy Bailey directed a terrific, shocking and bloody Titus Andronicus at the Globe and she returns with Macbeth, a play that can almost match it for bloodletting and horror.

While she managed the difficulties of the early work with impressive ease, though, the challenges of the mature tragedy get the better of her and the results are far less satisfying.

This is a postcard of Macbeth, a mere painting of fear. Bailey is certainly not devoid of ideas but they are layered onto the text rather than coming from it. Her focus seems to be on finding interesting ways of presenting the play rather than in interpreting it.

Things start promisingly, with groundlings made to stand with their heads through a black canopy, looking like so many sinners in Dante’s lake of Cocytus. As the play begins, they are joined by the writhing, bloodied top halves of more phantoms imported from some other hellish circle. It’s a strong image, typical of the visual flair Bailey and her designer Katrina Lindsay bring to the play.

Throughout, Bailey forces the terror to the fore. This is no psychological horror story, where fear is in the mind, but an all-out slasher-fest, daubed in vivid shades of red. All the deaths that are reported in the play are brought onto the stage: the Thane of Cawdor is shown, battered and bloody, his tongue sliced out and thrown into the audience for a cheap thrill; we see Duncan’s murdered body and later that of Lady Macbeth, bathed in gore.

It’s no surprise then that Banquo’s ghost should appear, not some shade of Macbeth’s imagination but another pitiful spectre plucked from the inferno, and his entry is one of the truly unpredictable and effective moments of the evening.

Elliot Cowan’s Macbeth is thuggish and husky-voiced (verse-speaking is generally not a strength) and the Lady Macbeth of Laura Rogers a shrill, hysterical housewife. It’s difficult to believe she is the driving force of the marriage. Their relationship is highly physical; at their first encounter on his return, they get straight down to it, their sexual grappling as primal as the violence we’ve seen up to then.

Julius D’Silva, a member of Michael Boyd’s marvellous Histories ensemble, brings gravitas and vocal weight to the small role of Ross, and his RSC colleague Keith Dunphy is a straggly, ignoble and Irish MacDuff. James Clyde is a vigorous Duncan, younger than usual, which makes sense of Macbeth’s feeling of rivalry and the need to do something now if he’s to achieve his aims.

A buzz went round the press room before the performance: how could one of Shakespeare’s shortest plays run to two hours 50 minutes? In the event, it topped the three hour mark, although the immediate fear was soon allayed as the production proved pacy, some scenes rattled through at lightning speed with barely a pause for thought.

It’s a mystery where the extra running time came from, as the production is swift and the storytelling is clear. If that’s all you want from Macbeth, it may satisfy.