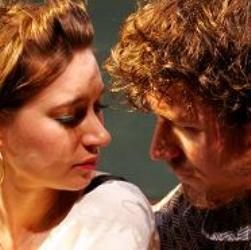 directed by
Caroline Steinbeis
Mad Forest is the name of a wood near Bucharest known for its confusing tangle of trees; it makes a perfectly apt title for a play about the complex and knotted personal and national histories of the Romanian people.

Twenty years after the Romanian revolution, Caryl Churchill’s play is being revived by the director Caroline Steinbeis, winner of the JMK Award 2009.

In 1989 Nicolae Ceausescu, the dictating ruler of Romania, was overthrown and executed by the people.
The play reveals the subsequent confusion and politics that affected the people on the ground; the workers, families, revolters, bystanders and victims.

Churchill went to Romania only three months after the event to document the movement. With a group of acting students she collected accounts of ordinary people and their experiences of the revolution. Mad Forest was the result, directly inspired by these accounts.

It’s a thrilling piece of work: chilling, honest, tough and often warm. It hooks its audience in by having characters talking simply about their daily lives, before, during and after the revolution. We see teachers at work and soldiers at play, the living conditions of those at home. Dreams lose their power, ideals are tested.

The central plot follows a troubed love affair; a young couple and their feuding families. In a patchwork of scenes we piece together their heart-ache and suffering. Steinbeis’s direction adds power to the honesty of the dialogue. We see secret bribes for an abortion, clandestine marriage, smuggled passports, the long lines for bread, the corruption, the fear of speaking and acting freely, devastating one-upmanship and brutal lies; we bear witness to it all.

There is humour too. There are scenes between a vampire and a dog, a priest and an angel (that the priest and the vampire are played by the same actor is a nice touch). There is even a bit of slapstick, when a man shouting political slogans in a bread line turns around too quickly when accusatory glances are cast back. This moment too is weighted with the political resonance.

The young cast are a joy to watch at work. Energy, charm and kinship is created between them in the intimate space of the BAC’s General Office. Some of the accents are a little wayward, at times slipping into American, and the inclusion of Irish accents is a distracting stretch too far. A few of the monologues become insipid, causing a significant drag on the play’s momentum but these are infrequent occurrences.

The sparse set is clinical and industrial but utterly apt. Similarly the costumes are right on the mark, emphasising the functional over the decorative.

The JMK Award is the UK’s most coveted accolade for young directors. It gives development opportunities to young theatre directors and a platform for a production of a classic text. Steinbeis clearly deserves hers, she has taken an intense and complex play and presented it with a smashing cast.