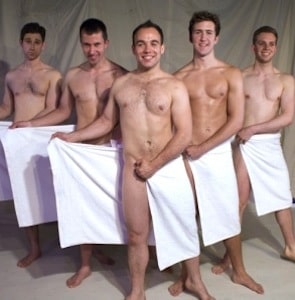 directed by
Phil Willmott
In direct contradiction to the self-deprecating, opening song title, this isn’t all about ‘Gratuitous Nudity’.

Song, laughter, dance, love stories and heartbreak all feature in the show and it’s amazing what you can do with 70 minutes, 16 songs, 13 writers, 7 boys and a healthy dose of unleashed inches.

To satisfy curiosities let us reveal that the boys are not naked all the way through. However this really should not put a damper on anyone’s enthusiasm to see that this piquant and perky, pecker-full, posteria-packed production.

Frankly, the least exciting bits are,well, their “bits”.
How do they end up naked then? Well, there are seven, good-looking, well-toned, boys in the show’s thin thread of a plot. Each from a different background and each with a nudity-related story to tell they audition to star in all-male, nude, musical revue. From being naked maids to having excessively celebrated circumcisions some have been changed and affected by the exhibited state.

For others it’s the desire for intimacy or longing for lovers. All together, they reveal a little about themselves, their inner lives, giving the characters richness and depth. Consequently, we appreciate them more as they put themselves through the gambit of first round, second round (shirts off), third round auditions, revealing a little more of themselves until rehearsals (just towels) and the grand finale, a performance of the show within the show.

Hats off to surprise non-nude boy number eight, musical director Leigh Thompson. Less pretty and perky, more handsome and wholesome, hero to the gym-avoiders in attendance, he gives praise to the rugged Robert Mitchum and his combination of wit and charm make this torch song, full or sardonic rhyme, a highlight.

Also noteworthy is the character of the nervous director played by Matthew Russell-Jones. His slim clothed, figure cowering and contorting behind his clipboard, afraid of the appearance of his own aroused appendage is a great cathartic relief, his face alone a riot, inspiring our sympathy. Thankfully, he too shows off his form in the end.

Naked Boys Singing has been in the London before. It premiered off-Broadway ten years ago and was at Madame Jojo’s at the turn of the millennium. One does wonder why has it returned now? Well, the reprise review comes to London courtesy of Phil Willmott. Perhaps there is a renewed confidence for the programming of queer theatre emerging after having such great success with the wonderful F**king Men (now London’s longest running Off West End show)?

But Robert Schrock’s conception is less provocative than it might have been 10 years ago. What with internet, most of the audiences will have seen a live willy before and certainly many of the mostly gay male audience may have seen a nude, nubile nymph earlier in the week, online or otherwise. The novelty factor has long since faded.

Having said that not much can top the candor of viewing the all-jiggling, all-jangling genitalia of an all-singing, all-dancing actor; it’s still a thrill and a giggle. Bright, cheery, enthusiastic performances and a little blushing make the night a delight.

The production will be part of the Pride London Festival Fortnight.