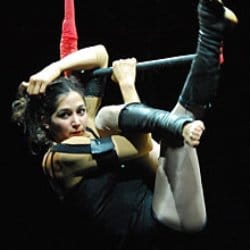 directed by
Firenza Guidi
Anyone who likes their circus to consist strictly of knife throwers, clowns and custard pies, should steer clear of NoFit State Circus.

Those a little more adventurous in their tastes, however, who fully appreciate that we now live in the twenty-first century, should get themselves down to the Roundhouse as soon as possible.

The foundation of the NoFit State Circus in 1986 was a creative reaction to Thatcherite capitalism, and to this day the company lead an alternative lifestyle, living and eating together and travelling in trucks and caravans.

Following their acclaimed show, ImMortal, which ran from 2004, their current production is the second incarnation of the Tab project, directly following Tab: Standing on the edge of the wilderness.
In essence, Tab: My fear and yours is a series of circus routines, each supported by a live band. It is set apart, however, by several factors that include the extreme nature of the tricks and the show’s promenade format. There are no seats, and instead the performances take place at various points around the Roundhouse’s interior with the audience invited to walk around at will.

But the production’s defining factor is the concept upon which the acts hang. The writer and director, Firenza Guidi, describes Tab (which is technically set in the future though that hardly matters) as ‘a new journey and exploration into the darker side of being’. In this way, it focuses on people living on the edge, exploring both their fears and aspirations.

At one end, we witness the performers’ capacity to dream, as epitomised in the opening number where figures suspended in harnesses twist, turn, ‘swim’ or hang motionless in the air, as a voice speaks of flying in a tin plane.

At the other end, we see people desperate to maintain their sanity. Performers swing frenetically from ropes, seemingly desperate to grab hold of something and retain a vestige of control over their lives. Love and trust also feature prominently as in one highly sensual act a girl literally throws herself off a trapeze to be caught by a man hanging upside down beneath it.

Whilst there are some solo acts, most are ensemble pieces where the central performer is surrounded by others who dance, swing or do their own ‘party pieces’. In this respect, there didn’t seem to be much obvious variation from one act to another, but it hardly mattered. Each sucked the audience into the drama, placing them on a high, and as one act tumbled into the next there was never any opportunity to feel deflated.

A greater problem was that, whilst people were supposed to wander at will witnessing different things, it soon became clear that there was an optimum place to stand for each act. This saw some people clambering to get to the front every time, leaving everyone else struggling to see any action that occurred on the ground.

But the most intriguing aspect of the production was the sheer imagination that went behind formulating it. Though I am glad that they did, it is far from obvious why anyone should ever have thought of supplementing a tightrope walking act with a man dancing on a net suspended just below the Roundhouse roof. Similarly, it took real inventiveness to see someone swinging from a rope, continuously rebounding off two trampolines hanging vertically in mid-air.

For anyone wishing to experience circus that stands right on the edge, Tab is something of a must. Posters billing the similarly brilliant La Clique, currently at the Hippodrome, read ‘Impossible to Explain, Just Go!’. Potential copyright issues aside, the NoFit State Circus would be more than justified in adopting this slogan to advertise its own unique show.