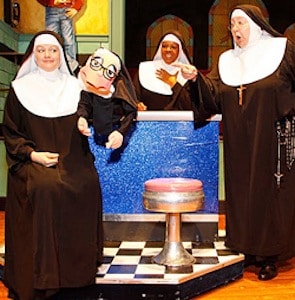 directed by
Dan Goggin
It’s easy to see why Dan Goggin’s convivial musical Nunsense has been such a hit over the the past twenty-five years. Riddled with tasteful, silly humor and jaunty but unmemorable musical numbers and propped up by a flimsy, nearly non-existent plot, the show is fluffy fun with a broad appeal.

Beginning as a cabaret act in the early 1980s, the show, in its more structured form premiered in 1985 and is currently playing a twenty-fifth anniversary run at the Cherry Lane Theatre, misguidedly updated by Mr. Goggin himself, who’s also on hand to greet audiences as they arrive before the show.
The musical focuses on a group of five nuns banding together to put on a fundraiser talent show in order to pay for the funerals of several of their fellow nuns, who were killed as a result of food poisoning when Sister Julia Child of God recently prepared a lethal dish. Though the Reverend Mother Mary Regina has buried the majority of the nuns, she also bought a flatscreen TV with part of the money, causing several of their comrades to remain unburied.

It’s a flimsy premise for a musical; one almost wishes for a looser structure, where nun-inspired silliness reigned supreme and flawed attempts at plotting were dispensed in favor of fun, formless vignettes.

The portions of the show involving Sister Mary Amnesia (Jeanne M. Tinker), a nun who can’t remember her birth name, are particularly funny. Tinker brings a winning naivete to her role and a pleasant singing voice to her songs, including I Could’ve Gone To Nashville. Bonnie Lee is similarly effective as Reverend Mother Mary Regina, a subtle twist on your stereotypical strict nun.

Unfortunately, the cast as a unit fails to impress. Despite some standout moments and glimmers of real talent, unfortunately, the production as a whole feels a mite too ramshackle, even despite the deliberately low-budget nature of the design elements. The show is supposed to appear a bit amateur. Big talent, however, would be needed to lift this production beyond its status as mild-mannered fluffy entertaininment and into the must-see category. To top it all off, Goggin’s music is almost wholly unmemorable. Songs occasionally entertain in the theatre, but there isn’t much to remember about the score.

Goggins has updated some of the elements of the script, but references to 1980s and 90s pop culture (Free Willy is one of the most egregious examples) feel forced and irrelevant, as if attempts to bring the story into the twenty-first century were only a half-hearted afterthought (the Reverend Mother does buy a flatscreen, not a laserdisc player).

Ultimately, there are more entertaining, more original shows to see in New York. Those with a built-in propensity for nun humor or devotees of Goggin’s brand of low-budget showmanship will welcome the return of Nunsense to New York. For the rest of us, hoping to be converted, the goods just aren’t there. The intimations of what made Nunsense a hit are still on display, but none of the inspiration remains.