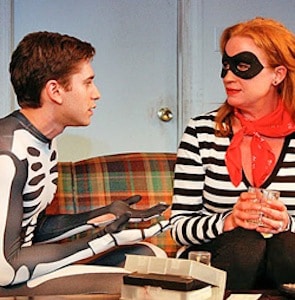 directed by
Evan Cabnet
In Elizabeth Meriwether’s gleefully dark new comedy Oliver Parker! codependency fuels the bulk of the action as young rich kid Oliver Parker, a damaged high school student, searches for sex, all the while avoiding the more serious implications of the sexual abuse he’s experienced as a child.

The action of the play takes place in the apartment of Jasper, Oliver’s family’s driver and the perpetrator of his abuse. Over the years, feeling sorry for the old man, Oliver has bankrolled Jasper’s dilapidated apartment. When we first meet the two, the details of their circumstances aren’t immediately apparent, but there’s obviously something strange about this friendship between a high school senior and the much older Jasper, a Santa Claus look-alike.
Oliver (Michael Zegen), soon finds himself obsessed with Willa Cross (Johanna Day), a middle-aged congresswoman whose daughter was recently raped and murdered. Cornering her at a benefit dinner he attended alongside his parents, Oliver, dressed in a skeleton costume, brings Willa back to Jasper’s apartment one night and attempts to seduce her by taking his clothes off.

Her initial reaction is to reject him, asking him instead to score prescription drugs for him from his parents’ stash, a task he agrees to take on. She sends her beautiful, racially ambiguous young aide Agnes to fulfill the task of picking up the drugs, bringing into Oliver’s life another source of temptation that he attempts to manipulate to his advantage, revealing the secrets of his abuse to her as a way of plying her with his sob story.

But all the while, as he’s tempting Willa and Agnes, it’s Jasper who casts the largest shadow over his life. Presenting Oliver with a self-help book entitled Just Breathe: How to Survive a History of Abuse, it’s clear that Jasper’s foremost goal is to secure Oliver’s forgiveness. As his life nears its close, his body riddled with the effects of years of smoking and drinking, Jasper wants to make sure that Oliver’s life hasn’t been ruined by his misdeeds. Oliver, on the other hand, seems content to continue as per usual, ignoring Jasper’s ill-fated attempts at redemption.

Meriwether’s play is extraordinarily well-written, riddled with jet black humor and uncommon pathos. If the role of Oliver never quite satisfactorily develops over the course of the play, it’s clear that his interactions with Willa, Jasper, and Agnes have some kind of meaningful, almost intangible effect on his future.

By the play’s end, he’s begun wearing Jasper’s shoes, a broadly drawn representation of the path he’s begun to take toward self-destruction. And Willa, weary of her own drug abuse, a habit she’s taken on in an attempt to mirror her own daughter’s addictions, seems headed toward some similarly grizzly end, mistaking Oliver for her lost daughter, languishing in her pain.

If Oliver Parker! is a difficult play to watch, it’s also one that addresses important topics of abuse without taking a heavy-handed approach. Meriwether never lingers on Oliver’s past as an unendurable tragedy but provides us with a vivid portrait of a young man struggling with the fact that he’s simultaneously repelled by – and attracted to – the one man who may have affected his life the most.

As directed by Evan Cabnet, a top-notch cast bring out the funny pain of each of the play’s characters. Michael Zegen’s gleefully fucked-up Oliver has the potential to switch from youthful optimism to strident pain with knife-edge precision. TV veteran John Larroquette brings a relatable despair to the easily hate-worthy role of Jasper, Johanna Day injects a weary confidence into the role of Willa Cross, and Monica Raymund as Agnes challenges racial stereotypes in a world where “Mexican” often replaces any other racial adjective for those deemed to be outsiders.

Each of the characters in Oliver Parker!, ultimately, has his or her own insecurities. Each is wounded in his or her own unique way and has a way of coping with life as seems, moment to moment. A play with so many unflinchingly raw characters could easily collapse under the weight of its own hoarded grief, but, thanks to Meriwether’s uniquely human, complexly comic take on their interwoven lives, Oliver Parker! makes for essential viewing.