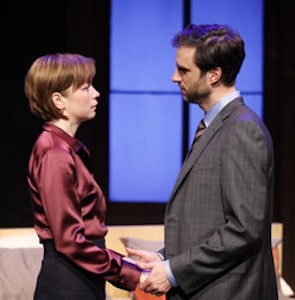 directed by
Bathsheba Doran
The Flea is a tiny theater that demands that actors inhabit their roles 100% of the time they are on stage; there is no place to hide. Their current premiere of Parents Evening, a two-hander by Bathsheba Doran, is therefore extremely lucky to be populated by two such talented actors as Julianne Nicholson and James Waterson. The audience could not be in better hands during this tight and emotional show. The experience of Parents Evening is like that of a pot left to simmer on a stove for too long, one that suddenly boils as the result of a small change in outside temperature.

The plot is fairly simple. The parents of a 10-year-old girl with some behavioral issues (nothing too earth shattering, just a 10 year old acting up) prepare for a parent-teacher night. They talk at and past each other in their bedroom as they get prepare for the school conference. The slight twist here is a role reversal in which the mother is a lawyer that struggles to balance work and home life and the father is a writer and stay-at-home dad. Their interplay is well-written and witty, but in the first act it is up to the actors to pull this out of clichd territory. Luckily Nicholson and Waterston are well up to the task. They inhabit these roles and bring life to what could be cardboard characters in lesser hands. Mr. Waterston in particular gives a nuanced performance in what could easily have become the embodiment of emasculated man syndrome.
It is clear in the first act that there are marital problems, but the cause is unclear. It might be an affair, maybe ennui, or else maybe these two people have just grown apart. The second half takes places after the conference and after Michael and Judy, the mother, have been told of problems with their daughter. Ms. Nicholson is giving full reign to shine in the second half, alternating between blaming herself and her husband. The fragility of their comfortable lives together is put to the test. Once again the story could take the audience into familiar territory, but the writing and the acting always keep the audience engaged.

These characters dont follow the paths one immediately assumes. Michael and Judy discuss, argue and disagree, but they do it with intelligence and honesty emotion. The role reversal fades in importance in the second act; this is the story of a marriage, a friendship and a partnership. The fates of these two people is the focus of the show, and rightly so.

Parents Evening is well directed by Jim Simpson. The pace is remarkably smooth for a piece that travels such a wide range of emotions. The simple set by Jerad Schomer works wonderfully for both the action taking place and the size of the theater. And the mood is complemented by the lighting design by Brian Alous. Ultimately, Parents Evening blends a fresh perspective and wonderful acting to give the audience an excellent evening out.