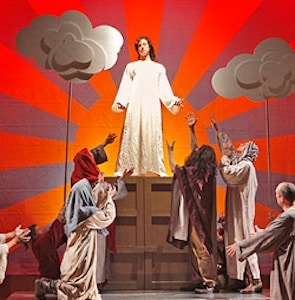 directed by
Mark Wing-Davey
In its current incarnation at the Irondale Center in Brooklyn, Sarah Ruhl’s ambitious Passion Play finds perhaps its most ideal home. Performed in a converted church space replete with deceptively ragtag scenic elements, the audience seated in folding chairs, it’s a wise choice on the part of Epic Theatre Ensemble to place their production of Ruhl’s tripartite three-and-a-half-hour extravaganza into such an inviting communal space.

Unlike most of Ruhl’s other plays, concision is not a key element here. Passion Play takes place by turns in Elizabethan England, Hitler-era Germany, and the Midwestern U.S. under Reagan. Each act of the play tells a separate story involving similar characters as the playwright takes us on a symbolic journey over time, following three amateur troupes as they produce the Passion Play under politically fraught circumstances.
The onstage backstage antics include love triangles and unwanted pregnancies (this time most certainly not the result of immaculate conception). In portraying the offstage lives of those inhabiting the holiest of characters, Ruhl seeks to juxtapose the divine and the everyday. Occasionally she succeeds, but more often than not the play has a wistful, unfulfilled quality, introducing symbols that never quite pay off and favoring sweeping statements about absolute power to intimate explorations of character.

Mark Wing-Davey directs here; this time around the production feels tighter than it has in its previous large-scale incarnation at Yale Rep (also directed by Wing-Davey), most likely due to the environmental nature of the staging. If the play never quite justifies its gratuitous length, there are nevertheless a number of exquisite moments to behold, particularly the playful contributions of Polly Noonan as a variety of village idiot characters and T. Ryder Smith as, alternately, Queen Elizabeth I (looking a bit like the Queen of Hearts), Adolf Hitler, and Ronald Reagan (an impersonation at which he’s particularly spot-on).

In the context of Ruhl’s work, it makes sense that the play’s third part was written ten years after the previous two. Here, in the not-so-distant past, the playwright finds her stride, making delicate use of her poetic voice. Dominic Fumusa’s take on the Pontius character as a Vietnam vet is perhaps the most fulfilling of the play’s characters and of this production’s performances.

It’s in this third part that Ruhl explores the intertwining aspects of her play, exploring the political rifts between the deep sense of responsibility felt by the English monarchs, willing to die on the battlefield alongside their subjects, and the flippant distance of American presidents, who, the playwright conjectures, send the youth of their nation to do their dirty work.

As Elizabeth strides across the stage, confronting Fumusa on the battlefield, Ruhl’s lofty aims seem partially fulfilled. She’s certainly set up a rich tapestry of situations to explore; unfortunately, however, the scope of the playwright’s source material – the Passion Play – more often than not outshines what Ruhl’s set up for us onstage. Ruhl sets up the dynamics between her Jesuses, Virgin Marys, and Pontius Pilates, but the actor characters presented onstage seem not only overwhelmed by their biblical characters (as seems to be Ruhl’s aim) but rendered irrelevant by them.