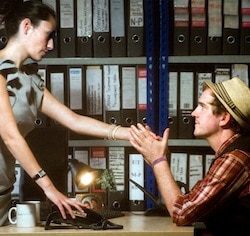 This is a real concern as the audience take their seats in the middle of the theatre (there are no chairs, just cushions). But it’s one that proved to be unfounded.

From placing you in the back of a car driving through the rain in NorthernIreland to situating you in a park watching a child cycle in circles, the use of multimedia isnever an end in itself; rather, it serves to fully immerse the audience in the world of the play.
The effect of four walls of video projections (akin to going on a 3D ride at a theme park) isall-encompassing, visceral, dislocating and highly successful.

The eponymous Vincent (Adam Best) is a restless and rootless wanderer, with an accenthailing from County Down but whose immediate family is living in Australia. A part-timeartist, he is still in love with Rachel (Sian Clifford), who has swapped both their relationshipand university-era purple hair and piercings for smart clothes, marriage and a Kafkaesque office, stacked floor-to-ceiling with ring binders.

Vincent is introduced in the second of four scenes, each of which take place on a different sideof the theatre and introduce three pairs of characters all of whom are (or will be) connectedby him.

It is ironic, then, that in spite of Bests nuanced performance, Vincent is the least interestingperson in the play. The rhetoric of breaking free and living spontaneously that he employs totry and persuade Rachel to come to Australia with him sounds tired and stale, a verbal habitthat is as self-conscious as the hat he wears.

In this regard, it is appropriate that one of the rare instances where the technical element ofthe play feels contrived is a video interlude of Vincent and Rachel talking on the MillenniumBridge. The significant time delay between the jerky, looped footage of their movementsand their dialogue shouts look, were making a point in a heavy-handed manner that, whileseemingly unintended, is well suited to Vincent. He is a perpetual student who can only findmeaning in dramatic gestures.

Another, more important issue is the way in which the suicide bomber plotline, which servesto bring the various disparate characters together, falls flat. The terrible consequences for asociety that alienates, disenfranchises and, as a result, radicalises youths in ethnic minoritiesis a well-rehearsed theme. The ambiguity of the language of self-betterment used by thebomber, Amar Saleem (Shane Zaza), is interesting but, in general, there is little here thathasnt already been done elsewhere.

In fact, the play is at its best when focusing on the older characters and their stories. RobinSoans is riveting as Dennis, the piano teacher tortured by illicit desire for his childlikestudent, Christopher. And Dearbhla Molloy is no less compelling as Irish grandmother Anne;hardened by years of isolation and familial neglect, her expressionless reaction to the newsthat her grandson, Vincent, has died in the bombing is a powerful evocation of the cost ofsurviving.

David Watson and director Clare Lizzimore have created a thoughtful and deeply moving production in which every element verbal, visual or aural is rigorously deployed tointensify the depiction of a society defined by inarticulacy and miscommunication, butnot without hope. Vincents explosive death not only foregrounds the black comedy ofthe plays title, but also frees Rachel to chart a course through life that is not dictated bythe same polarities of conformity or rebellion that have proven so destructive elsewhere.