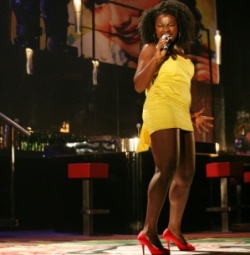 The shiny black and purple programme of the 2009 Edinburgh Fringe Festival has been sitting on my desk for nearly a week now and is starting to look rather worse for wear.

It will only take a little more dog-earring and margin scribbling before it starts to better resemble an elaborate origami construction than an actual, readable magazine.


The below list, however, was compiled on that first heady, coffee-fuelled flick-through and reflects the initial wave of things that jumped from the pages and said ‘please, see me.’ Some of these are quite obvious and admittedly I haven’t steered too far away from the big venues, but it is an accurate reflection of where I first leaned.

Daniel Kitson is someone who increasingly straddles the divide between theatre, stand up and story-telling and his new play/project at the Traverse, The Interminable Suicide of Gregory Church, about a man putting his affairs in order and writing letters before he takes his life, sounds intriguing.

The same can be said of site specific theatre types Grid Iron’s new work, an idiosyncratic staging of the writings of Charles Bukowski: Barflies (again at the Traverse). Analogue has a new piece, also about suicide, Beachy Head, at the Pleasance Dome, which fuses text, animation and the physical while Hoi Polloi, the company behind the beguiling Story of a Rabbit, return with their equally charming The Doubtful Guest (Traverse). Here you will also find Scottish writer David Grieg’s glittering Midsummer, a play with songs about which many good things have been said (and it is not, as far as I know, about killing oneself).

Over at the Assembly Rooms, there’s Judith Adams’ adaptation of Muriel Spark’s The Girls of Slender Means about the inhabitants of a women’s hostel in wartime London. Fans of Spark’s writing (of which I am one) are doubly blessed during this festival, as there is also a production of what is probably her best known novel, The Prime of Miss Jean Brodie, starring Anna Francolini as the titular teacher with fascistic sympathies.

On the new writing front there’s a new play from Dennis Kelly at the Traverse. Orphans, a psychological thriller, will be directed by Roxana Silbert, who also previously directed Kelly’s gripping and unnerving two-hander After the End.There’s also new work from Inspector Sands in If That’s All There Is (Traverse) and from Belgian company Ontroend Goed in Internal. Their Smile Off Your Face was an utterly sublime, if disconcerting, theatrical experience one that involved the blindfolding and wrist-binding of its audience and this newer piece, which was staged at last year’s Burst Festival at the BAC, promises to play similar games with the idea of intimacy.

Known quantities include two Young Vic productions: Sound&Fury’s Kursk, at the Drill Hall, is a realistic and immersive examination of life on a submarine that fires the imagination and makes its audience jolt with every metallic clank, while Che Walker’s funky, vibrant urban musical Been So Long (an ETT co-production at the Traverse) is appealing for sheer energy. Both are well worth catching. The same can be said of Melanie Wilson’s hypnotic Iris Brunette which will be at the University of Edinburgh Medical School, and Simon Stephens’ brief, brilliant Sea Wall (Traverse), the best bit of the Bush Theatre’s Broken Space season: a shard of wonderful writing that packs a devastating punch.

The ‘Really? Are you sure?’ film adaptation prize prematurely goes to a brave staging of The Wicker Man in the Pleasance Courtyard and I for one am curious to see quite how they pull that one off. Altogether now, in your best Highland accent: “Jesus Christ, no!”

Not featured in the pages of the programme but gathering pace with each passing summer, the Forest Fringe, now in its third year, continues to do exciting things. This time their resident company will be Little Bulb Theatre, the company responsible for the quite ridiculously wonderful Crocosmia. That alone is reason enough to make sure you visit.

This selection is, by necessity, brief and surface-skimming and doesn’t touch the International Festival or the vast comedy selection but it is, if nothing else, a beginning.