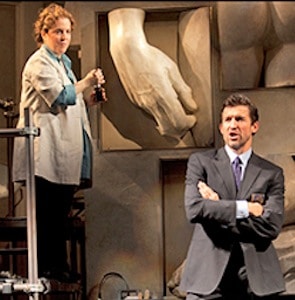 directed by
Christopher Ashley
Sometimes, in restoring a work of art, it’s preferable to preserve the imperfections caused by age in the interest of maintaining a sense of history. In Claudia Shear’s new play Restoration, an art restorer is sought for Michaelangelo’s David, and Giulia, our heroine, rises to the task in an attempt to illuminate the work’s hidden brilliance while respectfully declining to fill in the work’s cracks.

Giulia, a professor at a college in Brooklyn, has been largely overlooked in her profession as a restorer. She’s maintained ties with a professor from her university days, however, and he helps push through her application to restore one of the Western world’s most revered pieces of art – the representation of the ideal nude male form, no matter the rather modest size of its marble member.
Giulia initially comes up against some resistance from the selection committee. Daphne, a woman born into power and wealth and a natural PR gal, takes objection to some of Giulia’s more brazen outbursts in her past. However, on the condition that Giulia participate in a predominately scripted press conference each month, they allow her to begin the restoration process.

Upon beginning her task, Giulia meets Max, the handsome security guard stationed to protect the David. The two begin a months-long friendship, and Max goes above and beyond, arriving early and staying late so that Giulia can perform the task at hand. Eventually, Giulia develops a mostly unrequited crush on Max, who is married, and is left to deal with the limits that her age has placed on her life’s aspirations.

Shear’s play, which gives us plenty of facts about the David, remains mostly a surface-level exploration of middle-aged love and art appreciation. It’s pleasant enough to watch but one wants more from a play about a work of art so complex.

Director Christopher Ashley makes deft use of Scott Pask’s scenic design, which reveals the various parts of the David one by one as Giulia works her way up from the statue’s feet to its head. Still, though we as an audience come to admire Giulia’s reverence for her job, one wishes Shear had filled in some of the cracks and imperfections in her own script rather than taking the path of least resistance. The character of Giulia is set up as a rather dowdy, curmudgeonly woman, physically past her prime and unwilling to step outside of her comfort zone in her personal life.

As she comes into her own and comes out of her shell, we root for Giulia, but still we wish there were more complexity to her situation. Hers is a stock character and her story is an unoriginal one. Despite the imperfections of her script, author Shear is gives an appealing performance in the role of Giulia and Jonathan Cake adds warmth as Max; the two are amply supported by Tina Benko as Daphne, Alan Mandell as the professor, and Natalija Nogulich in a number of secondary roles.

There are certainly worse plays than Restoration. The playwright’s passion for art and life are evident in her work, and there’s an appealing breeziness to the evening as a whole, but one wishes Shear had plumbed the depths of her subject more acutely rather than skimming the surface. It’s a play about restoring surfaces, but that certainly doesn’t limit the possibilities for the play to dig beneath what’s outwardly visible.