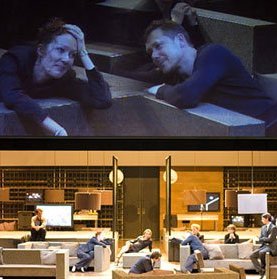 directed by
Ivo van Hove
The first thing to note about Toneelgroep Amsterdams Roman Tragedies, which appeared at the Avignon Festival in 2008, is that it lasts six hours. Seldom, however, will you see three Shakespeare plays staged so innovatively, and which have so much to say about our own times.

Far from feeling like an ordeal, the experience of watching Coriolanus, Julius Caesar and Antony and Cleopatra in one sitting is most definitely worth the required investment of time.

Dutch director Ivo van Hove has chosen to stage Shakespeares three Roman plays because he believes that politicians have always been well-intentioned, so that by examining those from whom we are detached, we can better understand our own.
He never attempts to whitewash politicians but he does use the plays to explore how, if they are ultimately well-meaning, things can go so terribly wrong.

The production, however, is really marked out by its unique dramatic approach. The stage represents a congress centre with various scenes taking place on different platforms within it. Surrounding these are fully functioning bars, food outlets, and internet cafes, and all of the scenes are filmed and presented live on a variety of screens.

The audience is free to purchase food and drink from the outlets and to watch the action from either the auditorium or the stage, where sofas and televisions are placed. If the result is that occasionally you find yourself huddled in a corner, barely able to glimpse the live action, that is rather the point. At real conferences people take time out, keeping up to date via screens in the foyer, and if any of us ever went to see Barack Obama speak we might only get as close as this. Even the fact that the performance is staged in Dutch, with English subtitles, makes the event feel like an EU conference.

Coriolanus lends itself best to this style of staging as the patricians clashes with Rome are borne out over a series of explosive press conferences and tribunals that naturally lend themselves to being filmed. Similarly, the act of filming his private conversations with his mother recalls reality tv shows. In both cases, the fact that the scenarios are witnessed by so many illustrates just how wide the repercussions of key individuals actions can be. At the same time, however, filming these events may actually make them more significant as a single utterance can be witnessed by many, preserved for posterity and raked over again and again by the media.

Julius Caesar is not quite as successful, as the plays first half does not lend itself so well to this media approach. The speeches of Brutus (Roeland Fernhout) and Mark Antony (Hans Kesting), however, are highly effective, made all the more so by the staging alterations that had to be enacted after Kesting injured his leg last week. As Antony suddenly moves away from the allotted podium to speak from his wheelchair, the camerawoman has to find a new spot from which to film, as might happen in real life if the unexpected occurred. Finally, Antony and Cleopatra is staged relatively conservatively, but prevails handsomely thanks to some splendidly powerful performances.

Other performances of the individual works may offer greater insights into a wider range of themes, but as a piece that explores the political aspects of these three plays, it is hard to see this production being bettered. Quite simply, Roman Tragedies is revelatory, revolutionary, and rather deserves to be treasured like gold dust.