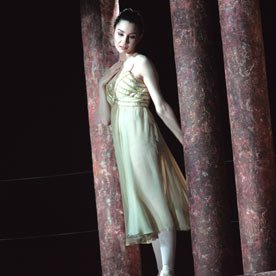 For such a famous, classical ballet ensemble piece, Romeo and Juliet has surprisingly little dancing.

There are numerous sword fight scenes, and the big corps de ballet set pieces (such as the market place scenes) only involve short bursts of dancing rather than long sequences. Even the Capulet party scene, with its famous music (Dance of the Knights although possibly now more known in UK pop culture as the opening theme to The Apprentice), hardly contains any ballet so to speak, more a series of poses and steps.
Most of the cast do not even wear traditional ballet shoes (let alone pointe shoes for the ladies), which gives the dance a grounded, raw feel that make the characters more real and which other classical ballets generally lack the rough and ready Harlots, for example, are flat-footed and classless.

Due to injury, Rupert Pennefather replaced Carlos Acosta as the opening nights Romeo to partner Tamara Rojos Juliet. Its a daunting prospect, Acosta being one of if not the Royal Ballets guaranteed money-spinner and his partnership with Rojo arguably one of ballets finest in recent years.

Indeed, much of Romeo and Juliet relies on acting all the little gestures, movements and facial expressions that tell the story. The intense drama of Sergey Prokofievs music is perfectly matched to Kenneth Macmillans choreography down to the tiniest detail, from the drums as Lady Capulet and Lady Montague square off in their first appearance to Romeo, Mercutio and Benvolio gatecrashing the party to what can only be described as an Elizabethan Pink Panther theme.

Pennefather, unfortunately, is somewhat out-acted by Rojo. While he is no doubt great in portraying Romeos youthful cheekiness, his love for Juliet was a little less convincing. Rojo, on the other hand, seems able to express her love and yearning through every pore of her skin, beside being gifted with technical mastery.

For Rojos Juliet, it is certainly the little things that make a big difference. A glance back as she meets Romeo, or her lifeless limbs as she dances with Paris, speak a thousand words. Theres a sense of a child not quite ready for adulthood when Juliet first meets Paris as she moves towards him she is looking to the Nurse, filled with innocence, and as she retreats she is glancing back at him, full of curiosity. But we see Juliet grow into a young woman in the balcony scene, from watching Romeo dance for her to joining him in a duet, to her own solo of leaps and turns, holding his hand to her heart; a moment of inspired beauty.

Whether its under-rehearsal due to Acostas relatively late injury, or simply a change in usual partner, some of the lifts between Pennefather and Rojo felt a little cautious, and there was the occasional inkling of a step or a landing not going quite right.

That said, the production was rarely short of stunning Romeo and Juliets first duet, for one, was full of gloriously sweeping dips and lifts; a simple walk side-by-side, hand-in-hand was made all the more heartbreaking because we know how the story ends. Macmillan was not afraid to look outside classical choreography to convey the agonising passion for such a tragic story, and judging by its enduring popularity one of a handful of shows that sells with practically no advertising needed it has certainly paid off.