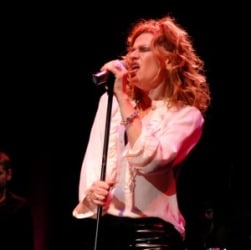 The lady strolls out on to the stage, her long, lean legs and lengthy paces suggesting a strut, but with a touch of nonchalance too.

She is glamorous and insouciant, hard, in your face, yet also dreamy and distant.

There is also something tired and weary about her. She’s been here, been there, been everywhere: this is Sandra Bernhard.
The success of her style relies upon her innate power, her energy and skill as an improviser. But this time around something is amiss, she doesn’t seem to have warmed up and seems perhaps, one almost dares not to think it, not quite up to it?

She still has that fantastic voice and belting out Christina Aguilera’s Beautiful as her opening number shows it off from the start. But the song is seven years old by now and isn’t quite in ‘classic’ territory yet. Later she tweets live on stage and we laugh, but that fad is now a little exhausted too.

When things don’t seem to be going according to plan she starts up: “I don’t care what kind of day you’ve had. You will laugh. You will enjoy. You will embrace.”

To be fair to her, she has been grinding her way through the PR and media machine. “Judy and Richard” and “those loose women”, they both get mentioned, but we’re gagging to hear her talk about Jeremy Kyle.

Nuggets of the fabulous are worked through the performance. A story about Madonna reprimanding her Malawian son, David: “You must learn how to share”; Bernhard retorts, “Pot, meet kettle” and the sarcasm and disdain are clear and hilarious.

The fashion industry also gets a piece of her mind, godparents of manner and mode, Anna Wintour and Karl Lagerfeld, are respectively on the receiving end of a caustic attack. It’s worth mentioning that Bernhard is wearing a bit of bling and some designer shoes herself.

She is wistful in her description of her blossoming relationship with Stevie Nicks. She describes the one night of magical bonding together that preceded a six month dearth of contact from Stevie’s side.

Her mood is notably more sentimental and sensitive now. Her partner Sara Switzer, and 10-year-old daughter, Cicely are mentioned many times too. Perhaps this is a sign of her mellowing. She tells a story of freaking out at her daughter for wearing waterproof mascara after a birthday party.

Despite Bernhard’s vocal versatility being given reign in her rousing, jazz rendition of Billy Paul’s Me and Mrs Jones and the thrill of hearing her version of Prince’s Little Red Corvette live, the show doesn’t fulfill. By far the most memorable aspect were the songs. Though these were marvellous, one wants more from Bernhard than her voice.

The show got off to a lukewarm start, built up slowly, a steady riser. But it never quite made it all the way to the top, to the sharp, sultry and scintillating highs we have come to expect.