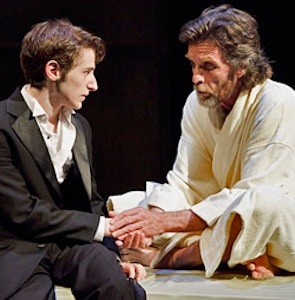 directed by
Matt Shakman
If Jonathan Tolins’s new play, Secrets of the Trade, traces a familiar backstage story of a starstruck kid struggling to make it big, thankfully, it does so with a determinedly plucky charm. Starring John Glover and Noah Robbins (a standout veteran of last season’s Brighton Beach Memoirs), Tolins’s play is a coming of age story possessing tremendous heart, showcasing some fine performances, and – for the most part – portraying realistically what a life in the theatre is like.

Martin Kerner (Glover) is a famous Broadway writer and director when sixteen-year-old Andy Lipman writes him a fan letter asking for a job on his new show. Not sure whether to expect a reply, a letter comes nearly two years later – better late than never. Andy’s idol wants to meet him for lunch.
Things begin well enough. Kerner takes Andy under his wing, encouraging him to develop his directorial skills while studying at Harvard. But Andy’s parents, Peter and Joanne, remain protective of him. The whole arrangement seems to good to be true, particularly to Andy’s mother, and they encourage their son to maintain his sense of reality.

Andy’s relationship with his mentor, as is to be expected, has its highs and lows. Though Kerner can’t quite appreciate his performance in Harvard’s latest drag cabaret show, he does encourage Andy to be himself and embrace his burgeoning sexuality. It turns out that Andy, like Kerner, is gay. And though his parents are consistently supportive, Andy still struggles to come to terms.

Tolins’s highly theatrical play is, overall, a strong piece of writing. Atwitter with an air of backstage dishiness, Kerner’s and Andy’s friendship feels wholly real. Though Robbins, a fine actor, is miscast in the role of Andy (he looks entirely too young), John Glover shines throughout, full of a sense of craggy world-weariness, laced with a certain pervy charm. The dynamic between Robbins in Glover is full of the tension typical in such relationships – shot through with alternating feelings of admiration, fear, and excitement.

The play’s weaknesses lie in the dynamic between Andy’s friendship with Kerner and his relationship with his parents. Though both Mark Nelson and Amy Aquino do a fine job as the Lipmans, their material is subpar when compared with the flinty showbiz scenes given to our central pair of protagonists. With parents as supportive as Andy’s, his rebellious streak as a middle class-bashing performance artists seems out of sync with the rest of the play. For the most part, however, Secrets of the Trade marks a great start to Primary Stages’ season.