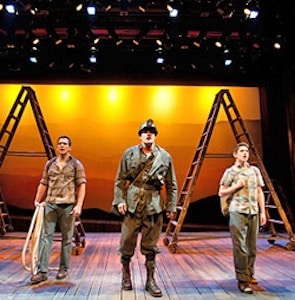 directed by
Joe Calarco
It’s difficult to find much to like about The Burnt Part Boys, a new musical by Mariana Elder, Chris Miller, and Nathan Tysen, now playing at Playwrights Horizons. Despite an affable cast and a standout performance by Al Calderon, the show has a cursorily-drawn quality that causes its story to lack drive and vigor and, consequently, leaves an audience uninterested.

Calderon, who’s in fantastic voice here, plays Pete, a young boy whose father has died in a local mine that’s recently announced its reopening. The site of the tragedy, which occurred ten years prior, is referred to ominously as “the burnt part” and is the threat that looms over the events of the show as Pete quests to keep the mine closed so as to spare future miners – including his brother Jake – the fate of his father.
While Pete sets out on a quest to destroy the burnt part armed with a bundle of stolen dynamite and his ragtag crew – including tomboy Frances (Molly Ranson) and chubby Dusty (Noah Galvin) – his brother Jake (Charlie Brady) and Jake’s friend Chet (Andrew Durand) set out on a mission to stop him. They’re two miners’ sons, both of them feeling as if their promising jobs at the reopened mine forebode nothing but promise for two men fit for physical work.

The trouble with these dueling tribes of kids is that their relationships to one another are never suitably introduced in Mariana Elder’s book scenes, meaning that even biological brothers seem only cursorily connected within the context of the story at hand. A host of burly, masculine heroes, represented as figments of Pete’s imagination, are played by Michael Park, who takes on the roles of Sam Houston, Davy Crockett, and Jim Bowie amiably, but these characters and the show’s attempts at dream sequence techniques seem unimportant to the evening as a whole.

The show’s music, by composer Chris Miller and lyricist Nathan Tysen, consists mostly of pedestrian, repetitive pseudo-bluegrass songs, alternating between plucky we’re-going-on-a-journey numbers and ballads. None of the songs are memorable, though Calderon and the rest of the cast have appealing voices.

Joe Calarco’s scattered direction, hindered by Brian Prather’s scenic design, which utilizes a number of ladders in chairs in various configurations, never seems to find a unified sense of movement. Though simple sets can often yield inventive results, it’s difficult to quite picture a row of ladders as a barbed wire fence, and a scene in which Jake and Chet hand-over-hand their way down a length of rope is embarrassingly misguided.

Much of the show’s midsection consists of the characters crossing back and forth across the stage through various ladder-and-chair setups, singing rather unoriginally about their travels. It’s the kind of journey that seems like it’ll never end. Fortunately for the audience, the seemingly interminable show The Burnt Part Boys does indeed end.

Though the piece has a faintly interesting concept at its heart – the struggle between remembering tragedy and moving forward, but also between striving for something better and settling into routine – the topics on hand have been handled with more style in other shows, an example of which is Billy Elliot, a show that roots its overall message in the narrative trajectory of its title character.

Though Pete is entertaining enough, he hasn’t got much of a narrative arc. By the show’s final half hour, including the burnt part’s collapse and a dream sequence involving fallen miners – it’s clear that there’s little reward for the struggle of sitting through this tiresomely uninteresting show, which, for all its boy-on-a-mission flourishes, seems still to be in search of its own voice.