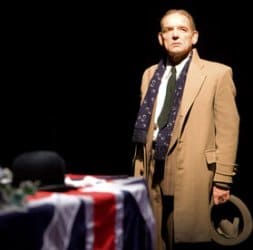 directed by
Greg Hersov
The most disturbing thing about John Osborne’s The Entertainer isn’t its portrayal of family dysfunction, dispossession, poverty, infidelity, alcoholism, the cost of war or the crushing tide of human hopelessness, it’s the fact that 52 years after its original conception, the play is still depressingly relevant today.

It’s around the time of the Suez Canal Crisis of 1956. The working-class Rice family, like virtually every British family of the time, has been left battered and bruised by two world wars.
Poverty is widespread, the social landscape is changing too quickly and the only means of escape are found at the other side of the world or at the bottom of a gin bottle.

Despite its semi-political context, The Entertainer is best interpreted as a sharp, social drama-come-satire. Act by act and layer by layer, Osbourne gradually unveils the complexity of post-war, post-imperial Britain and the chastening effects of change and modernity on the common man. Its onslaught of grit and realism is dense and, at times, pretty unforgiving.

The Rice family home is humble and sparsely furnished. Billy Rice, a retired music hall star and proud Englishman (enthusiastically played by David Ryall), bemoans his noisy, “immigrant” neighbours below and modern society in general with all the one-foot-in-the-grave cantankerousness of Victor Meldrew. Having made an unexpected visit, Billy’s initially timid but increasingly strong-willed and independent granddaughter Jean (convincingly characterised by Laura Rees) confesses that she protested against the government’s pro-war policies and then tries in vain with the aid of a few guilty gins to open up to her seemingly disinterested grandfather about something else.

It’s a conversational dynamic that repeats itself throughout the play. Shadowy confessions are implied but often remain agonisingly unsaid, yet the play’s protagonists seem too drunk, exhausted or disinterested to listen to each other. There’s a constant sense of preoccupation, of modernity slowly taking its toll on the play’s characters and, more pertinently, the country’s social fabric.

Osborne’s main focus, as the title suggests, is on music hall performer and head of the Rice Family, Archie. Having followed his father Billy into the music hall business, Archie is everything one would expect from a showman: ebullient and egotistical; slightly sinister and very sleazy. Memorably and energetically played by David Schofield, Archie Rice is often found with top hot, cane and blusher, under the spotlight, offering the audience impromptu music hall renditions that cross circus performance with cabaret.

Although the play’s eccentric Dennis Potter-style musical mini-scenes convey a slightly creepy tone, at its heart The Entertainer is a sympathetic paean to music hall a form of “folk art” variety entertainment that Osborne grew up with and that was dying a death in the late 50s. Using the demise of the music hall as an allegorical pivot, Osborne begins to unravel the Rice family’s secrets as a series of tempestuous family ructions that even the quick-witted and sharp-tongued Archie is unable to keep a lid on. As the Rice family rips apart at the seams, news of a family death compounds misery with tragedy.

The bristling second half meltdown and mournful climax is faithfully and engagingly interpreted by the Royal Exchange cast. When the play increases in intensity so too do the performances. Oliver Gomm is particularly convincing as the defiant, but ultimately beaten down young son, Frank. However, there are occasions when things become a little disjointed, leaving Schofield to carry the performance to its conclusion. Roberta Taylor is perhaps a little too subdued as Archie’s emotionally-strained wife.

Being as conversational as it is, there is little in the way of production excess. This is probably a good thing, even if some of the musical interludes drag a bit and there are few mental souvenirs of the performance to take home. But predictably, after a challenging couple of hours, it’s John Osborne’s gloomy, absorbing and still-relevant social commentary that will serve as this audience’s most obvious and disturbing memento.